Back in March, we announced a Tier 2 version of the Dark Caster Class. Since then, Pisces and the class balancec team have been hard at work crafting a class worthy of the Undead Legion (among all of their other balance, testing, and planning contributions). The Legion Revenant Class is dark, powerful, and fit for the Legion's most loyal and mighty warriors. 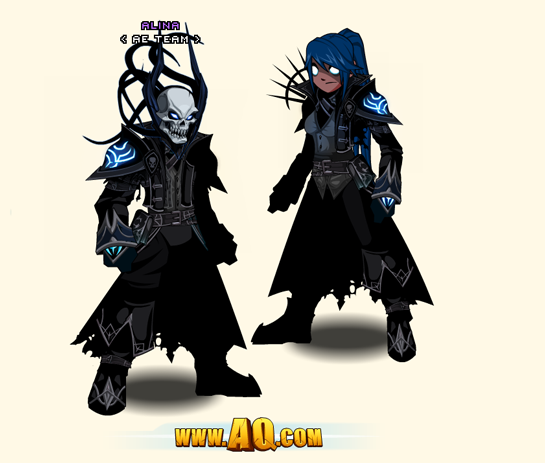 If you are a member of the Undead Legion AND have any of the Dark Caster Classes, you can /join revenant to begin the quest to create the Legion Revenant Class.

For those of you in the Undead Legion that did NOT get the Infinite Dark Caster Class for Legion Tokens, you're in Luck! We've added the Class back to the Undead Legion Merge Shop this weekend as a special gift from Dage the Evil. (Will he add it to the shop permanently?... wait and see!)

Legion Revenant farming quests will resemble the old Legion Exercise quests-- the balance team has crunched numbers and has one things to say...  Are you willing to slay a legion for the Legion?

Tier 2 Dark Casters regain mana from all hits landed in combat, more if it's a critical strike. The amount of mana regained is based on the amount of damage done relative to their own HP total.

Rank Needed: 2
Mana Cost: 30
Cooldown: 6 Seconds
Type: Magical
Description: Conjure otherworldly flames that sear one target for moderate damage, reducing their crit chance by 15%. The flames protect you, decreasing incoming damage by 20%. Both effects last 12 seconds and increase by 3% and 4% respectively with each use for up to 5 stacks.

Note: Deals 50% spell damage to primary target. Applies Seared to targets, decreasing crit chance by 4% (stacks to 10). Applies Enveloped to the caster, decreasing all in by 4% per stack. All effects last 12 seconds.

Rank Needed: 3
Mana Cost: 35 Mana
Cooldown: 10 Seconds
Type: Magical
Description: Touch the darkness within yourself and up to six friendly targets by drawing out their twisted inclinations, increasing their dodge chance, critical hit chance, critical hit damage, outgoing physical damage, and outgoing magical damage by 30% for 12 seconds. Immorality strengthens your magic, increasing your Haste by 10% and applying a strong heal over time effect and mana shield for 12 seconds.

Note: Applies Depravity to up to six friendly targets, increasing dodge chance, crit chance, mag out, and phys out by 30%. Also applies Dark Exhortation to the caster, increasing haste by 10% and applying a strong HoT. All effects last 12 seconds. Also applies a 12 second mana shield.

Rank Needed: 10
Type: Passive
Description: Increases enemy damage in by 7% for 30 seconds and stacks to 15, 50% chance to apply from Atramentous Shade, Wicked Purgatory, and Anathema.

Legion Revenants command a darkness far deeper than lesser Dark Casters, as members of the Legion’s most elite corps. This class annihilates swaths of enemies with its powerful AoE attacks, potent buffs for its allies, and crippling debuffs for its enemies. At its best, it increases the damage up to three enemies take from all sources by a whopping 105% using its rank 10 passive Infinita Nox-- reducing them down to nothing more than bones and ashes. When fighting weak monsters and other heroes, Legion Revenant can block fast yet weak incoming damage with its mana shield and retaliate against its attackers while remaining unscathed.

This class performs at its peak with full wizard enhancements. Wizard enhancements will allow you to deal the most damage and heal the most with your HoT, allowing you to survive longer than using full luck.Any sort of damage boosting weapon with Spiral Carve or Mana Vamp Awe Enhancements will greatly improve the performance of this class.Very strong willpower will be necessary in order to obtain this class-- no need to go insane on your journey of showing the legion you have guts, take breaks on this long journey heroes.