The Legend of King Alteon

Once upon a time, there was a simple farm boy named Alden. In a land terrorized by an evil King, Alden did the impossible. He raised a sword against the evil King's monsters... then he raised an army... then he united all of the Kingdoms... then he saved the land and freed all the people from the evil King once and for all! (Story begins in the game Bladehaven) They hailed him the good King Alteon. Justly so! He was caring, honest, wise and true good. He loved the people of his Kingdom.  To so many heroes of Lore, he was a father figure... a shining beacon of hope. 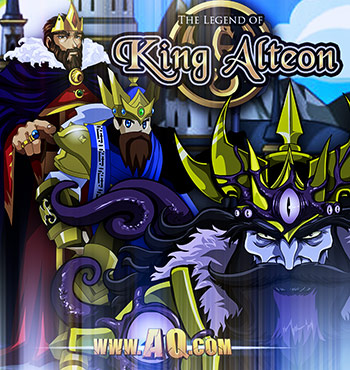 Five years ago (Story of the game DragonFable) King Alteon battled the evil forces of the DoomKnight Sepulchure. But he did not do this alone. He saw great potential in a new hero of the land. King Alteon has always had a good eye for seeing someone's true potential. So it comes as no surprise... he saw your potential the moment you first met him.

During the final battle between good and evil (the opening story of AdventureQuest Worlds) King Alteon and Sepulchure squared off to personally finish their battle once and for all. But the fight was inturrupted by two very unusual people; The ChaosLord Drakath... and you. We did not understand at the time what Chaos was, but Drakath had obtained godlike powers. He slew Sepulchure and mortally wounded King Alteon.... leaving him infected with the chaos. It was truely a Kingdom in Chaos. But King Alteon was no ordinary man, he did not succumb to the infection and wisely knew there was only one way to save the land from Drakath. The land needed to be united... a truce must be forged between the forces of Good and Evil.

So he choose you, to travel to the fallen undead flying castle of Shadowfall and convince Gravelyn, the leader of the evil foces to take part in the truce. A bold move considering Gravelyn is the daughter of his former arch-enemy, Sepulchure. You did the impossible and the truce was losely formed. So, just as King Alteon had united the land against that evil King a long time ago, you had now united the land against the ChaosLord Drakath. (I told you King Alteon had a good eye for heroes.) In the great adventures that followed, King Alteon always had the answers. He always knew the right thing to do. Alas, it was only a matter of time before the Chaos finally overtook him. King Alteon knew this day would inevitably come. That is why he selected you... he selected you to do what is right, and save the world from what is coming next. You are now our only hope. We must defeat the second lord of chaos "The Twins" and then face Drakath himself!

In absolute darkness, even the flicker of a candle is a blinding beacon of hope.