Artix Entertainment & the history of Friday the 13th

As a young child, I was keenly aware of the terrifying Friday the 13th movies featuring the hockey mask wearing Jason Vorheese. These were days before iconic movie monsters like Jason, Freddy, & Chucky were nerfed by popular media down to the ranks of Count Dracula and the Wolfman. I had actually believed that the whole Friday the 13th is an unlucky day superstition was because of the movies... but I was wrong.

Story time! It seems like forever ago that we ran our first ever Friday the 13th event inside the game DragonFable. (Which they are re-creating at www.DragonFable.com this weekend.) I am not positive, but we may have been the first video game to do an event of this type. Nobody did weekly events back then. Let alone special events around strange holidays... like the unluckiest day of the year. An army of undead wearing hockey masks attacked the town of FalconReach. Gosh only knows where the Necromancer responsible got that many hockey masks... at the end of the war, the necromancer was revealed to be the little devious blue moglin, Zorbak. It became tradition, so the next year undead invaded the town again. But this time the head of the army was a mysterious girl necromancer wearing purple robes. This was the first sighting of the Vayle, the Necromantress. If you played the Doomwood saga in either AQWorlds or DragonFable then you already know she became one of the most important and interesting characters in our world... as far as darkness and the undead go. If you have not played, then you really should open you map and hit the DoomWood button. When writing the design notes to talk about that event I did some research and found that Friday the 13th... has a long crazy history!

Friday the 13th being unlucky comes from a huge number of pretty hard to verify historical events. The Knights Templar were wiped out on a Friday the 13th. The book Canturbury Tales featured the day promoting it's association with unluckyness. The number 13 itself has a lot of unluckiness assosiated with it. For example... Did you know it is a Nose myth that having thirteen people seated at a table results in the dead of one of the diners? Along with breaking a mirror and walking under a ladder, the day of Friday the 13th has prospered in our lore as a spooky and terrible day to do anything... like... the biggest event we had ever thrown! 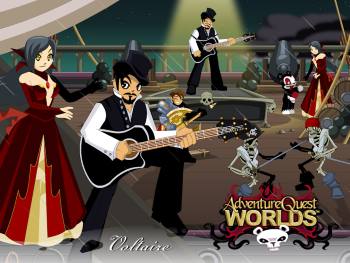 Enter Voltaire! We first met him at the DragonCon Convention. He is the darkest, spookiest, and frankly the funniest entertainer we have ever met. Very few people can do such shocking and decidedly non-PG performances for live audiences of 5,000+ people yet also be flexible enough to create songs for TV shows on the Cartoon Network. If you have not heard this story before... I was visiting New York and he invited me out for Sushi. I pitched an idea for a live event and he smiled and replied, "So when do you want to do it?" I said, "How about Friday the 13th?" he said, "But that is only 2 weeks away..."  I said "no problem!" It was the biggest event we had ever attempted at the time-- 5 acts, voice acting, music overlays, several new major server features that required a live syncing of every instance of the event on every server. What could go wrong? Well, if you were there, you know. We maxed out the server entire network... literally filled every server to capacity and the bandwidth usage was so high we brought down a lot of other sites hosted on the same network. The event was so huge Gamer magazine asked me to write an article about it and I did a TEDx talk on how we did. But more importantly, everyone who played it loved it... we turned our Friday the 13th events into a tradition. (and as to not burn out Voltaire, we try to keep it to one BIG Friday the 13th event featuring him per year.) 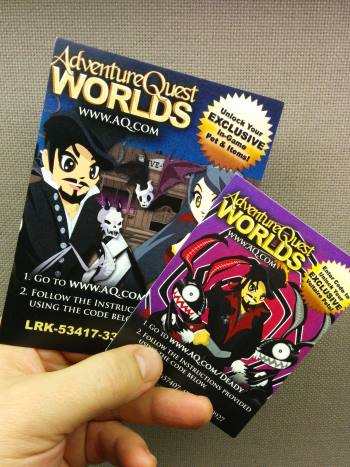 As it turns out there are THREE Friday the 13ths this year! 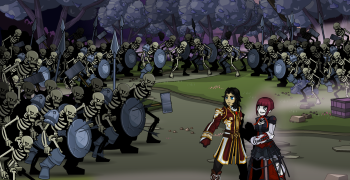 Back on the topic of movies... many people including myself always imagined that there would be a 13th Friday the 13th movie. That somehow it would be really special-- the best of them all. Maybe one day that will happen. But something that WILL happen... is OUR THIRTENTN FRIDAY THE 13TH EVENT which will actually happen in November of this year! O_O

To spread the word of this week's event... please tweet using the hashtag #Fridaythe13th and  www.AQ.com . If you have any great screenshots from past events please share them with me. Maybe we can get a gallery of screenshots up on Facebook too!