We’ve heard your requests to mix potions and make spellscrolls efficiently again for a long time. In response to that, Alina in /alchemyacademy has decided to open a new line of business! 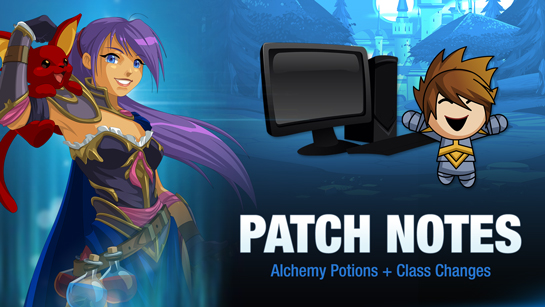 Now, you can purchase Dragon Runestones and Arcane Quills for gold, or directly purchase some of the potions you can craft for a (high) amount of gold. You decide what your time is worth!

Due to this, the affected potions have been moved out of their original shops, and will now be sold from /alchemyacademy. So if you can’t find your favorite Dragonheart Philtre, Vigor Potion, or other favored consumables, check at the Alchemy Academy!

Today’s update brings changes to a few classes that saw an unexpected power spike in PvP with the introduction of the Mythril PvP Amulet and Awe Enhancement updates. Additionally, we have also made adjustments to a few of the calendar classes and have given a certain Nulgath Nation class a much needed buff.

ChronoCorruptor is already in a pretty good spot, but although its Visceral Shift and Shiftburn auras are powerful, they did not last as long as they needed to. These changes should increase the overall power of the two auras.

Tuning down Dragon of Time’s sustain in PvP and increasing its overall PvE performance.

Dragon’s Will:
- Can now miss

In PvP, Frost SpiritReaver was incredibly dominant in most matchups. Reducing its stat debuffs and Haste passive should give classes more opportunities to combat it.

Infinity Knight was lacking in performance compared to the other calendar classes, so it is getting a much needed tune-up.

The new PvP amulet resulted in Sentinel being able to instantly deal a large amount of unavoidable damage, these changes aim to add more counterplay to it.

Rift of Shadows:
- Base damage increased

ShadowWalker has also received a few changes that are focused towards PvP. These changes have little to no impact on PvE performance.

In PvP, Vindicator of They is able to consistently stunlock its opponent, making it difficult to interact with. Therefore, we are adjusting its stun duration, but increasing its overall damage output.

Mass of Incandescent Gas:
- Now has a 50% increased chance to crit

Hot Cha:
- Haste: 20% > 25% (The Collector Class shares this passive with Vindicator of They, so they both got the increase)

Void Highlord’s current performance does not properly reflect the amount of effort that it takes to obtain it. These changes aim to bring it back up to a suitable power level, while modestly keeping it in check for PvP.

Contract:
- At rank 10, now applies an aura called Abyssal Sacrifice to the target, which increases incoming physical damage by 5% for 8 seconds, stacks to 20.