Why Making Video Games is Awesome

Hey guys. I’m gonna preface this by saying that what you’re about to read will not sound like any of my usual DNs. That’s because everything I’m about to tell you is absolutely true.

How BrutalCorn Came To Be

So it’s Friday morning at around 10:30. I’m just getting out of the elevator, thinking about what kind of work I’ll have to do. I go up to the front desk, and engage Syra in small talk before I go to AQW’s base of operations. As I’m doing this I hear the door to the stairway down the hall crash open, as if someone had kicked through it. A few people get up to check it out.

The only reason I know that they got up to look is because I could hear their confused yelling from reception. I’m a little cautious, but also incredibly curious. I could not have been prepared for the abomination that was waiting for me just around the corner. 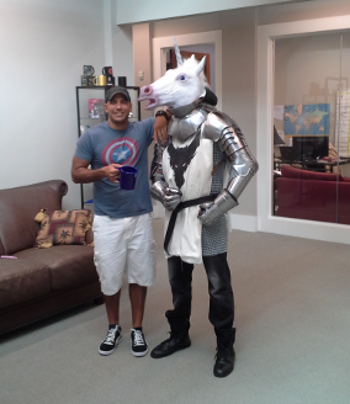 When I had first entered Artix Entertainment as an intern, I was informed to be ready for anything. I said I would do my best. No, insisted Cysero and Alina, be ready for anything. To be sure, there have been a few exciting moments in the office. The entirety of the Grimskull release, for example. Or that one time I found a dead mouse in the pantry and didn’t tell anyone about it because I didn’t feel like dealing with it (Sorry guys!).

But this…this was on different scale. A whole other plane of existence. It was the first thing that I’ve seen since I started working here that legitimately unsettled me, mostly because Dage, who was wearing the get-up, would not stop laughing.

It wasn’t like actual laughter though. It was more like a low, continuous, chuffing sound, like: Huh huhhuh huh huh. He wouldn’t stop. I bailed shortly after I snapped a picture. It was simply too weird.

But that’s not where the story ends. No, I would later look to the QA chat and be horrified at the monstrosity Bladebrawl was creating. Here is the evolution of evil. 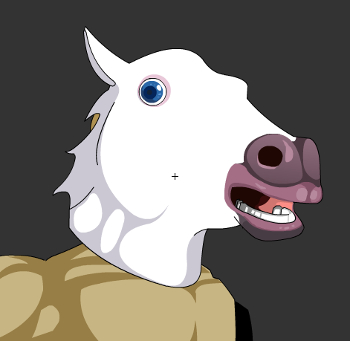 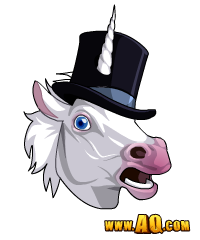 NOT YOU TOO, MEMET!

But despite how supremely strange this seems, I urge you, the player, to look a little bit closer. This entire incident is game development in a nutshell. It’s a tapestry of madness and genius. It a fascinating blend of the beautiful and the odd. And it takes a lot of effort to channel these raw concepts into a usable form. 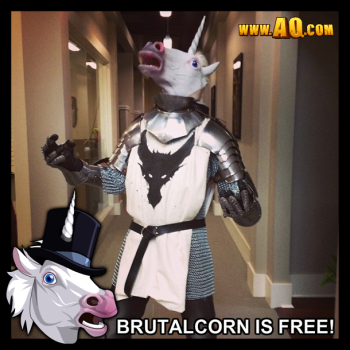 From the artist who made this creepy helm, to the programmer who codes gameplay, to the writer who gives it a story, to the unhinged mind that came up with the deranged idea in the first place. This is how games are made. But the most important part of the equation are the people who take the finished product and poke it, or prod it, or toy with it.

The people who journey deeply within this strange creation in search of their own individual desire. You might be search for meaning, or a good story, or a few laughs, or a quick jaunt to another world, but you’re searching all the same.

A game is nothing without these people, and these people are you, the players. And you are an enourmous part of what makes game development beautiful.

Game on, friends. Game on.*

* Begin the most brutal(corn) game by looking at the Game Menu for the BrutalCorn shop!