Vindicator Of They Class

PART 2 Of the They Might be Giants / AQW Birthday Event!

We have a lot of surprises waiting for you in the conclusion of The Collector like a new achievement, a new member only area and challenge fight, a bunch of new drops and even new items added to the AC Rares shop but nothing is more highly anticipated than the release of the They Might Be Giants theme class, the Vindicator of They! 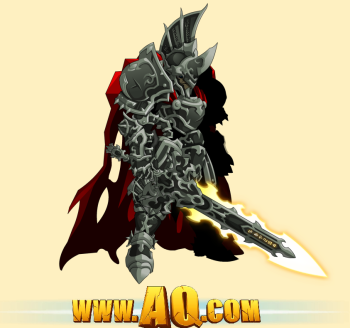 Here are a few fun facts about this new class: Every skill (other than Auto Attack) references a They Might Be Giants song or line of lyrics. Three of the skills have new battle effects graphics that were designed JUST for this class setting it apart from every other class in AQW & finally, we only have the rights to the event for 1 year so this class WILL go rare when the rest of the event leaves.

Now let's get into the wrought armor and taker it for a test drive.

VINDICATOR OF THEY SKILL SET

This class was designed to be a single target or solo class. It will work best in groups like every other class, but it can handle a fight on its own and it likes it that way.

It's an armored caster class so I used INT Enhancements but you might want to try HYBRID or HEALER and see how those work for you. If you encounter any issues with this class, it will be managing your Mana... at least until you hit Rank 10. :)

As I mentioned above, mana is the issue at the heart of this class. The good news is that it receives mana for every hit delivered and every hit taken so stay in close and go crazy.

Summons a Super Taster to bite your foe, causing a DoT and slowing your enemy for 6 seconds. 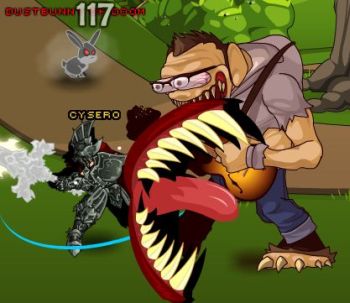 This is your first and least expensive skill. Once you get your healing attack it's hard to remember to use this one but you MUST NOT FORGET IT. The Damage Over Time is one of the most powerful in the game and the haste debuff is something you never want to be without.

I JUST WANT YOUR HALF

Notice that the cooldown is only 3 seconds on this one? That will cause you to want to spam it but don't fall for it. You will eat your mana and be left with nothing in no-time. It is the wise warrior who knows when to apply a self-heal.

WE WANT A ROCK

Petrify your opponent for 4 seconds but applies a DoT to you. 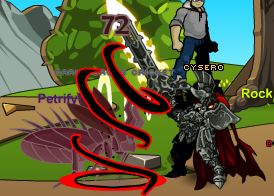 Use this skill at your own risk. The ability to turn most monsters into stone is a nice one to have, especially when you want to deal out the last few seconds of damage in peace but the price may not be worth paying. It's not that big of a deal since you can heal the DoT away but again, it is a question of how you want to spend your mana.

Special passives here. Ranking up the class unlocks the ability to attack faster than ever before while dishing out 20% more damage. In case you've never read one of these skill break-downs before 20%/20% are HUGE buffs to the class.

Create a tiny SUN causing massive damage. Applies a DoT and reduces the damage the enemy does for 10 seconds. 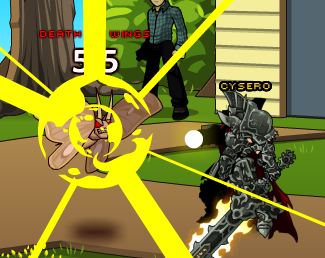 Ok, let's go over this one slowly. First, while the mana cost is high, the cooldown is only 10 seconds so it is possible to use it very often. Second, it deals a massive blow to your enemy. Third, it ALSO lays a DoT (Damage Over Time) on them leeching them for even more damage. Fourth and finally, it ALSO debuffs the enemy reducing the amount of damage they can do for TEN full seconds.

Frankly, this skill is like winning the lottery, falling in love and learning you can fly all in the same day.

After playing with this class for a while we decided to add a Rank 10 passive to it to help with Mana flow. The reward for getting your Vindicator Of They all the way to rank 10 is that your mana will completely refill itself from time to time.

There is something else you should know about this skill. Since it's a utility skill instead of an attack we've coded it to happen about TEN TIMES MORE OFTEN than the other rank 10 passive you've seen.

As usual Itzachi in Battleon will be offering the class for 2000 ACs for those who feel that they can't wait, but for the patient there will be an EARNED version of the class that you will be able to get from John and John in the Collection map. As you can see in the images above, there is also a matching Helm, Sword and Cloak that you will ONLY be able to earn. You can earn these items by collecting Tokens of Vindication from daily quests in the map.

Since Members have a daily set aside JUST for them they will be able to earn all of these items in HALF the time and if you Upgrade this month you will also be able to call yourself a 3rd Upholder!

Itzachi will also be offering a Class Rank Boost for ACs in her shop to help you get to rank 10 double quick.

October is AQWorlds' anniversary month! And THAT means that anyone who upgrades (as long as your upgrade expires ON or AFTER November 4th, 2011) will become a 3rd Upholder! That'll get you a sweet character page achievement and the EPIC Platinum Star Sword!(The Star Sword will not be released until November 4th.)

As promised, next week we will be releasing the brand new 2011 chapter of the Mogloween Storyline with a bunch of new surprises, monsters, seasonal rares and (If Zhoom is right) The ability to go to other players houses and Trick or Treat!