Talk Like A Pirate All Day Tomorrow (er Sunday)!

So tomorrow is Talk Like A Pirate Day (actually I think it's Sunday but we are adding the items  tomorrow) and once again Quibble has special items with which to party down.

These items will NOT replace the current items in his shop but merely expand his shop. None of last year's items are returning in their original form but nearly all of last year's favs have been altered for this year's theme (being Ice Pirates and Undead Curses). You will also see a few BRAND NEW weapons and a new seasonal rare house.

I say it's a seasonal rare but it may never return. You can never tell with Quibble. None of last year's items are coming back this year but with the time travel fairies still supplying Quibble, you might never know... you may see them in the game in the far distant future!

I've decided to give you a list of ALL of the items to which you may look forward.

There might be a few more items before the sun goes down but those are FOR SURE! And just like last year they are ALL AdventureCoin items so no need to worry about storage space!

(remember, you can store AC items for FREE in your bank, just hit the AC tab while you're there!)

The next part of the Arcangrove Saga takes place at the bottom of the Arcangrove Loch in a place called the Natatorium. As Beleen mentioned earlier, it is normally a place of peaceful meeting between various merpeople but has come under Ledgermayne's control. It looks like it might be trying to keep you from completing the Supreme Arcane Staff but I think you'll find that help comes from some unexpected sources.

This area features a new and interesting puzzle concieved and executed by the increasingly wicked Llussion. It involves standing on buttons, shifting sub-lake currents and moving statues. Good luck. You will need to solve this new puzzle before you face this week's Boss (courtesy of Miltonius), and the Guardian of the Runes of Riparian.

You will also find a Lochload of new items direct from the hands of Dage, and a new (pretty hilarious) Reverse Merperson armor for all players from J6. 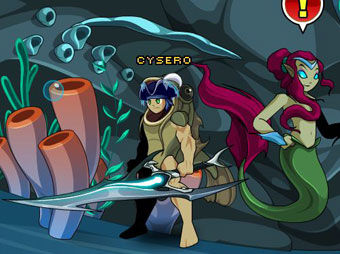 That's right. Fish on top, dude on the bottom. I'm standing next to Nisse the Mermaid Sage and sporting two of the TLPD items for this year, the Scimitar of the Seventh Sea and the Icy Captain's Hat. I'm a hot mess.

Earlier I said that the Obridago shop was leaving earlier this week, and it obviously didn't. We decided to remove the Obrigado Brasil shop and the FREE color custom Sorcerer's Apprentice Hat at the same time, when we restart tomorrow.

The Obrigado items might not be back until next year and the hat will NEVER be back so make sure you get them of you want them!