They Might Be Giants in AQW's 3rd Birthday Two-Week Event!

If you follow some of our Twitter accounts then you already know that It's AQW's 3rd Birthday and we have some GIANT treats in store! The band THEY MIGHT BE GIANTS will be joining us in a two week adventure filled with space and time travel and awesome music!

If you've never heard of They Might Be Giants then you're missing out! They are the coolest and strangest alt rock band out there! Zazul, Rolith and I are especially HUGE fans of the band but everyone here at AE loves them.

Really guys, we've brought you a few bands that not too many people have heard of before but They Might Be Giants is NOT one of them! If song titles like "Birdhouse In Your Soul", "Ana Ng", "Dr. Worm", "Why Does the Sun Shine? (The Sun Is a Mass of Incandescent Gas)" and "Istanbul (Not Constantinople)" don't get you singing then you don't know what you're missing. Don't worry... we'll fix that for you :)

The special event starts on Friday October 14th at 6:00 PM Server Time (EST)! We will have even more information for you as we get closer to the Birthday Event!

First things first, tomorrow is National Taco Day. This holiday celebrates everything taco and all of it's many varried forms. Macho Taco will show up in Battleon tomorrow and stay for one week (until next Tuesday). Once again he is offering the absolutely delicious tacomancer armor and the rest of the taco seasonal rares!

Then, on Friday AQW's spookiest event begins. When the strange, creepy town of Mystcroft appears then you know Mogloween is getting close! This Friday we will be releasing all of the previous years Mogloween events to let you get caught up. 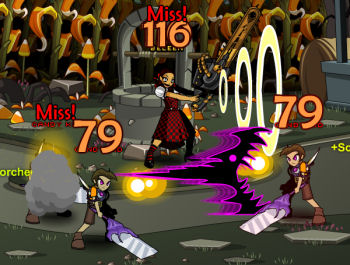 We'll keep those up during the two week Birthday Event, then on Friday, October 28th we will release this year's ALL NEW Mogloween event with expanded storyline AND all new items!Remember, you won't be able to play this year's Mogloween without completing all the previous years' adventures!

Quibble isn't gone yet but he will only remain in Battleon for a little while longer. This is your VERY LAST CHANCE to get this year's TLPD rares!

Did You Get Your Free Member Keys?

It's a new month and that means AQW Members get 2 FREE Magic Treasure Chest keys from Twilly in Battleon! Some of you had a small bug this weekend when trying to get your keys if you had them in your bank. The engine can't merge items in your Inventory AND your Bank which resulted in you getting nothing and not being able to do the quest again.

Have no fear! Zhoom was able to reset the quests for each of you that encountered this bug so you can now complete your quest and get your two free keys (Just remember to take them out of the bank and put them in your inventory first).

If you DO forget again, we've added a new pop up to remind you to get your keys out of the bank. Just keep the Item Accept Box open until you have moved them unto your inventory, then click YES on the box.

Now, I'm just going to go freak out for a second

HOLY CRACKERS AND BRIE! THEY MIGHT BE GIANTS IS GOING TO BE IN AQW!