Time To Kill Some Time

The 2013 AE Calendar has arrived on HeroMart.com!

This year we went in a new direction by printing the calendar on a single poster sized sheet and when the year is over you can flip it to the backside where the image takes up the whole page! 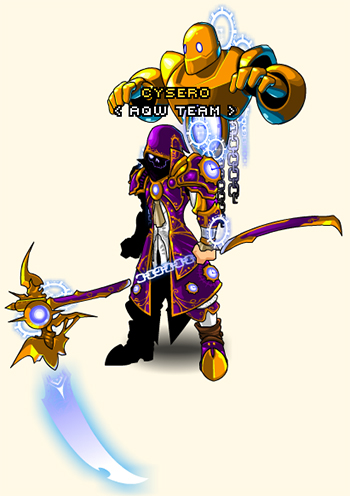 It's a kind of Where's Waldo of AE. Diozz managed to work NPCs from AQW, AQ Classic, DragonFable, Mechquest and Epicduel into one single amazing image! Dage spent days painstakingly painting the image and we double checked the dates this year so I'm sorry to report that there is no bonus November 31st in the new one. 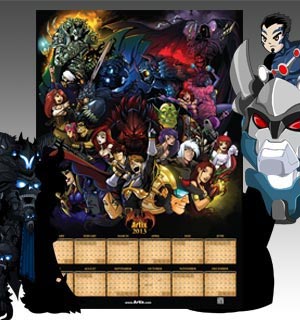 and now it's time for a breakdown...

The TimeKiller is a rare breed of hunter who travel the breadth of space and time hunting your prey. Are you a bounty hunter? Do you hunt the most dangerous monsters in history? Do you track down history's greatest treasures? When you have a very long life and enough power to travel through time at will, you have to set your own goals.

TimeReapers are a rare breed of TimeKiller. They have lived long enough to grow bored of collecting histories greatest artifacts and hunting extinct species. They have taken to tracking down and hunting the most dangers prey... other TimeKillers.

Either way, it's an interesting way to kill some time.

The class is a single target class based on the ROGUE mana regen model so you will get mana back on hits and crits but ALSO get slightly healed on a dodge. Only 1 of the skills help you dodge so don't expect that to happen too often unless you use a build based on Dex like all Thief Enh, but some of the attacks are physical and some are magical so I suggest a full Hybrid Enh build.

Every time you use this ability to attack an enemy for moderate damage, it slows their local time more and more making them attack more slowly with every hit. Stacks up to 4 times.

Causes moderate damage, and forces your enemy to relive the attack over and over again taking damage over time.

You hit them for moderate damage and forces them to relive the pain in the form of a DoT (damage over time). Starting to catch on? There is a very stong TIME theme to each of the TK's skills.

Surrounds yourself or an ally in a bubble of compressed time. The target will heal, regain mana and attack more quickly for 10 seconds.

This is an interesting skill. Accompanied by Pyromancer's shield skill animation, this skill causes you to heal rapidly (in the form of a decent HoT or Heal Over Time) and causes you to regenerate your mana faster. The interesting thing about this skill is that you can use it on yourself by default or click on another player and use it on them. VERY good in guild combat situations. It's costly but worth every sencond of waiting and every point of mana spent.

I think it's the first skill in the game that allows you to assist another player with mana regen. It will make you a good friend to have.

As your control over time grows, so do your abilities. You can't move faster but you can make everything else move more slowly.

Causes High Damage and locks your enemy in time leaving them frozen as time flows around them normally for a short time.

It's a High Damage Skill AND a four second stun. Four seconds may not seen like a lot but with Compress time it gives you just enough time to catch your breath and dive back into the battle for another round. Also a very good lead-off skill in PvP vor Obvious reasons.

Rarely causes up to three monsters around you to get frozen in time while your local time is compressed causing you to attack more quickly for a short time.

This was a fun workaround. We can;t actually stun more than one enemy target at the time so this actually casts a dramatic reduction in haste for ten seconds, which increasing your own haste. You're basicly the Flash.

It's a pretty fun class. There's not a lot of interaction so it's not very complex, and while I like classes that take some brain power to use, It's nice to play one that is just simple. clean and efficent.

Don't forget to check out tonight's Span release as Iadoa continues to lose his mind to Drakath's chaorrupting influence.

41 days until Just Another Day