They May Have Lost the Battle…

Woah woah woah WOAH. What is going on here? Do you see this?

This is bad. For many reasons. The first being: you made me use Caps Lock! The second: the War Shop that unlocks at 100%. And let’s not forget about the Chaos Lord’s Music Pirate minions. If they reach Lorestockapalooza this Friday… well… we don’t know exactly what will happen...

Honestly folks, we planned out this upcoming Live Event based on you guys winning this war. But, um… unless you get 13,256 cans of Mountain Dew and stay awake for the next 48 hours slaying Pirate after Pirate… yeaaah, ummm…. help plz? 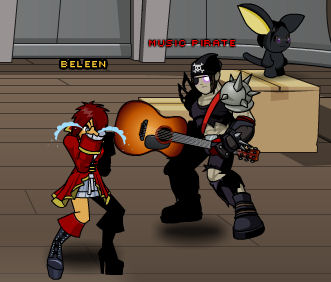 Mozzy, blissfully unaware of the upcoming devastation.
Help us fight, you lazy moglin!