The Void comes to ancient GreenGuard...

There’s no specific date for when the Void Incursion began. Spirits and elementals from that eldritch place had been materializing in GreenGuard for quite some time. No one can say when they became organized. It was I who first theorized the concept of a unifying intellect. I took the Elk Clan into hiding. Finding this intellect would be our way of fighting off the invasion.

The Eagle Clan dropped out of contact on the day that I tapped into the hive mind. I have lost count of the days since then. Every waking moment is a battle against the intruder in my head. When I sleep the dreams come, and sometimes, when I wake, the dreams stay. I am left walking through the nightmarish, rotting corridors of my own mind.

I have to stay secluded from the rest of my tribe. To see their Elder in such a state at such a trying time may be too much for them. Now that I have seen into the consciousness that is commanding the void forces, I know that this is a task that must be shouldered, no matter the cost to myself. There are more living, sentient beings besides the druids living on this fragile world, and I would not wish the fate that the void has in mind on any of them.

I can’t confront my tribe until I can keep the dreams under control, or at least competently pretend that I am in good health. But so often these days my mind is not my own. Sometimes I can feel this presence looking at me. It makes me feel cold. Cold and lonely. Sometimes I hear it talk, and I can’t distinguish the sound of it’s voice from my own. The only way for me to fight is to watch it back.

And so I say to this voice, this consciousness, I know you’re out there. And I’m watching you. I’m always watching. There isn’t a lot to do but watch.

Authors note: It isn’t often that I get the chance to speak personally to you all. The support and feedback that I’ve received from this community is nothing short of staggering. Words can’t describe the depths of my gratitude. So thank you. From the bottom of my heart, thank you. Tomorrow will be the advent of my first in-game release, and without your comments on the forums and on twitter, the AQ Worlds team would not have let me out of my cage for long enough to write it. Also, if it does well enough, they’ll actually feed me this week. Here’s hoping!

(P.S: To those who want to know how to pronounce my name, don’t worry about it. Just call me Nots or something.)

I Believe in Quibble

Deck the halls with Armors and Weapons!

You asked for him! And Quibble Coinbiter is back in Battleon just in time for Tonight’s Release! He’s brought a sleigh-full of Frostval-themed items with him too! 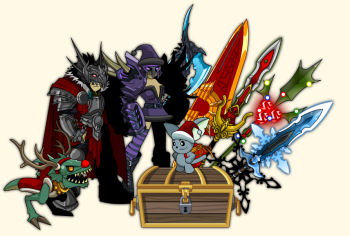 There’s actually A LOT more items in his shop. But there is only SOO much I can fit in a 350 pixel wide JPG, you know? It doesn’t really matter if you’ve been naughty or nice this year… Quibble’s got something for everybody. So stock up on some AdventureCoins and get shopping!

If you have been keeping a tally… that’s a whopping 21 NEW Quibble Items! Someone’s in the Frostval spirit this year =D

After you’ve stuffed your inventory with Frostval trimmings, head back to the Frozen Northlands and speak with Adak in the blinding snow forest. He’s come up with a theory on how to get you into the Void... but he’s left the saving Nythera part up to you!

I refuse to give out any spoilers as to how the storyline will play out. I already gave you hints in my last post (which was only like 12 hours ago), so if you REALLY would rather read than play through the awesome release, scroll down a bit and get your pink font fix on =3 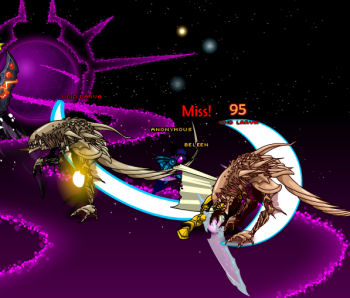 The NPC in the Void will enlighten you on everything you need to know about the Void. EVERYTHING. This little guy is very insightful. He even has an impressive Shop stocked with some DF-Classic Void Items and New Void Items… if you can afford his high prices.

The monsters in The Void have a nice collection of items that they drop, too. A Void Larva Pet even drops from one of the baddies… but I’ll leave that up to you to guess which monster drops it =p

The Void in AQWorlds was created entirely from DragonFable’s Void. Map, monster, and weapon art was borrowed from DF in order to recreate the epicness that is The Void with a completely new storyline twist!

Please Note: If you haven’t already played through all of the Frozen Northlands quests, including Old King Coal’s quests (which come directly after defeating Queen Aisha) and finding Nythera in the blinding snow forest, you will NEED TO do so in order to play tonight’s release!