You can never have too much pink

So I got a txt from Cysero yesterday that a present had arrived for me at the Lab. I was in class at that moment (studiously learning, not tweeting or anything like that) so I had to wait an excruciating 20 HOURS to come back to work and tear open the package sent by Gianna_Glow! 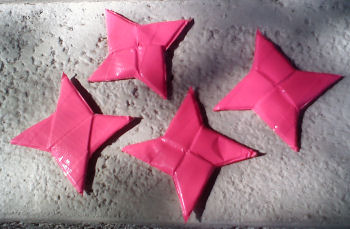 AAAAHMAAAAAZZZIIINNNG! Ginna_Glow hand-crafted these beautifully pink shurikens and I just HAD to share them with you! I wonder how she guessed my favorite color?

Thank you, thank you sooo much Ginna_Glow!

And the story gets even better! Artix came back to the Lab a few moments ago and was greeted by a barrage of pink shuriken fury. And um… heh…. he is currently missing in action.

If you have seen this paladin, please direct him back to the Secret Underground Lab. I promise I won’t use them against you, Artix! We have a release to plan!

Speaking of a new release…

Captain Stratos of King Alteon's SkyGuard has just reported that Galdius and his Draconian Sky Pirates are growing more bold with each passing day. King Alteon has dispatched the SkyGuard to patrol the skies near Battleon and any strange airship activity should be reported to the nearest city guard.

And they’re sooo rare that WE haven’t even seen them yet. And we’re the ones making the game. Talk about intense.

Maybe you have heard, or maybe you haven’t: J6 released a batch of his secret Birthday Items last Friday! These items will be taken out this afternoon (in a couple of hours) so if you wanna get your hands on some super secret J6-exclusive B-day items, head to the Hyperium (if you can find it) and wish that bounty hunter a belated happy birthday!

Once J6 takes out his birthday items, you will no longer be able to get them. I don’t know if he is going to re-release them on his next birthday or not, so if you want a little keepsake of J6’s birthday, I suggest you head to the Hyperium right away.

In addition to all of that…

The 2011 Year of the Moglin AE Calendars sold out completly during pre-orders! WOW, that was fast—so fast that the AE Team didn’t even get copies themselves.

Not to worry! We didn’t want to leave you guys and gals out either. These calendars are in such high demand that we printed out ANOTHER THOUSAND CALENDARS and we ARE taking pre-orders at HeroMart right now!

Head over to HeroMart and Pre-Order your 2011 Year of the Moglin Calendar! 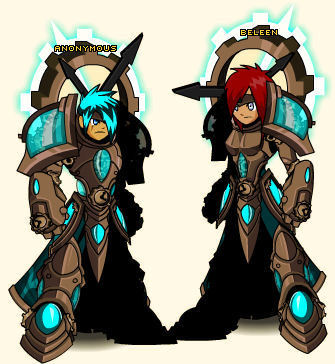 Yup. The Cape and the Class are entirely animated too. You can read more about the calendar and the Chronomancer Class skills in a previous DN post by Cy.

Hmm… what new stuff do you wanna see this Frostval, anyway?

So I hope that has answered a bunch of questions for ya ^____^  See you later gators and crocodiles and gila monsters and frogzards and every reptilian in between!