Back For More Undead Fun!

And by fun I mean torture.

Once again, Artix is personally crafting this story which means that we get to do a lot of things that the engine has never done before (which means a lot of new and interesting bugs). It also means INSANE cutscenes as the story continues.

I don't know if you were here for the last Doomwood but it nearly KILLED poor Samba. We asked an inhuman amount of effort from our (at that time) rookie animator, and while this amount of work would have killed, driven insane or caused a lesser animator to walk out of the AE Undergrounjd Lab never to return... Samba somehow rose to the occasion week after week (each week getting steadily worse for her) and somehow managed to pull off the equivalent of THREE MONTHS worth of weekly release animation in just under a single month.

Now we're back and while Artix DID learn that he needs to write fewer cutscenes, he seemed to think that meant that he could just make those few longer and even more insane than the earlier ones!

Needless to say this week it's all hands on deck as we return to Doomwood with an all new story which in nicely to the introduction of our first action figures!

I'm sorry to say that also means that I will be needed in the weekly releases for a while which means no time for Mid-Weeks, BUT we will probably have more MEMBER ONLY addition content in Doomwood than we have had in any other zone. Special fights, side storylines (which is much like a mid-week in itself) special armors, weapons, pets, capes, helms and other goodies and maybe even a special class (we'll have to see on that one).

They are nearly here!

My sources (at least the reliable ones) tell me that they are on their way to the U.S. Toys R Us locations right now. They should arrive there a week or two before theyn reach us here and become availible on HeroMart.Com.

People often ask us why we can't get them to Toys R Us locations in other countries and that's mostly because there are different branches of the company and our relationship is so far only with the American branch of the company.

If our stuff keeps selling well in the American branch then we might be invited to start up a relationship with various other branches of Toys R Us... but that's really up to you guys.

Toys R Us gets to set their own price and we want the HeroMart price to be competative with the Toys R Us price so we have to wait and see what they set their prices at before we can set ours. If we decided early and went too high with the HJeroMart price, then we would be shooting ourselves in the foot and losing sales to Toys R Us. If we go to low, then we undercut Toys R Us and they might decide to cut ties with us which kills any future deals we might make with ANY branch.

SO... soon they will get theirs, we will find out what the decide for the price and then we will be able to tell you the HeroMart price whicl will be very close to the store price.

For the special Limited Edition BLACK version of the toys, I'm pretty sure that the price will be $50. It comes with the same in-game items as the normal versions but we made a LOT less of these and you will ONLY be able to get them from HeroMart. These are for hardcore collectors ONLY (or maybe people who want to resell them on E-bay for double price when they sell our and go rare).

More news on that as it arrises.

A lot of you seem to be taking advantage of this deal and not just for the rare DeathKnight set! 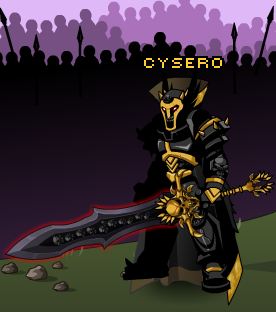 Here's the deal: Right now we are offering our normal 3 month +1000 ACs Membership package (both on our payment page AND on the Portal Site payment page so you can get it with Artix Points) except for a limited time you get an ADDITIONAL 1000 AdventureCoins AND you get the DeathKnight Set (armor, helm, cape and sword based on the traditional DragonFable design) as a bonus!

It will at LEAST be here until the end of the week but this IS a Limited Time offer and once it's gone the armor set will go Rare (Any future DeathKnight class will have new art). 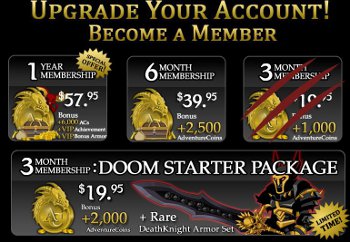 Even if you're already an AQW Member, getting DOUBLE ACs and a rare armor set for the same old 3 month price is a pretty good deal!

If you have already taken advantage of this deal and can't find the set, remember to look in your BOOK OF LORE in the AE section. You will see the DeathKnight badge near the bottom and you can open the shop from there! :)

This Wednesday is the final of the five AE artist run of Live Draw events. Dage The Evil is on deck and warming up his drawing hand (by hand signing 500 of his Coffee Dragon prints which sold out over the weekend on HeroMart) 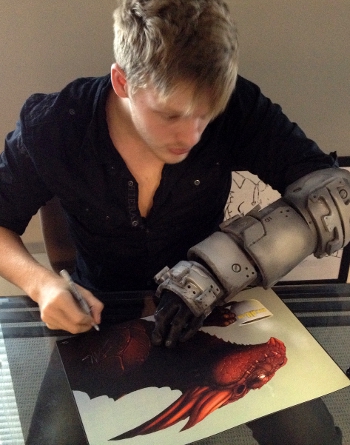 As usual, we have no idea what he's going to draw beforehand but knowing Dage it will be EPIC. Like a banana with a hat or something!

Remember, we go live at 4:00 PM EST (Server Time) and the shop will stay up for only about 24 hours!

A lot of you older players have heard this before but over the weekend we got to hear from a whole new wave of NEW players telling us that Alina was promising them they could become mods or offering them free Coffee Dragon prints in exchange for passwords or credit card information.

THAT IS NOT THE REAL ALINA!

No member of the AE staff will EVER ask for your password or credit card information. Neither Alina or I have personal Facebook accounts... we only have Fan Pages. Here is MINE and here is Alina's.

Fake Facebooks and Twitter accounts pop up ALL THE TIME and there are LOTS of people who think that they have found the real deal, but use your head. Be smart. Look around the internet, talk to your friends... most importantly, don't believe everything that you see on the internet.