We are almost 1 week away… Mogloween is next Friday the 31st! And I know you’ve just been dying to sneak-a-peek at the tricks-and-treats in store for you and millions of your friends in the best browser RPG, AdventureQuest Worlds. So… let’s get spoiled with some spoilers! 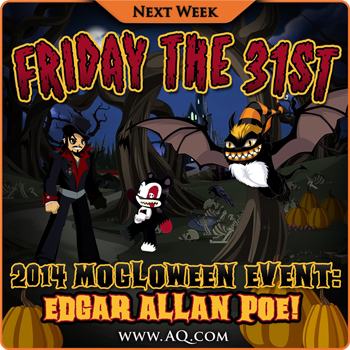 Spoiler Alert 1: The Fall of the House of Crusher

Relive the classic tale of mystery and the macabre in a brand-new zone inspired by Poe’s The Fall of the House of Usher. Here you will meet Roderick Crusher and his sickly sister Madeline, who suffers from catalepsy (an illness that makes her appear dead). Quest through the haunted House of Crusher as you attempt to save Madeline’s life before it’s too late!

Spoiler Alert 2: The Cask of Amoglinado

Poe’s twisted tale of terror, The Cask of Amontillado, comes to life in browser based glory. Your friend, Montresor, believes he found a rare cask of Moglin Berry Juice: the Amoglinado. And you, my friend, just so happen to be a Moglin Berry Juice connoisseur! Quest with Montresor into the city’s vaults until you reach the very end where the Amoglinado is fabled to reside.

Undisputedly the most notable poem by Poe, The Raven inspired lyrical twists to the AQW-themed version entitled: The Wyvern. As not to give away too much, I’ll leave you with the opening stanza:

Once upon a night so eerie, while I wandered, weak and weary,

From slaying many a monster in the lands of Lore,

As I quested, Achievement Tracking,

Suddenly there came a whacking,

As if some beast was attacking, attacking with a ridiculous roar.

“’Tis some wild boar,” I mumbled, “whacking with a ridiculous roar.

DO YOU FEEL THOSE GOOSEBUMPS?! You should—I get the chills just reading that! And next Friday, October 31st, 2014, every hero and every villain in this 2D MMO will get to experience Edgar Allan Poe like never before!

Stay tuned to the Design Notes and the AQW Facebook for more spoilers!