This Friday, Learn More About The Next Chaos Lord.

We introduced Maximilian Lionfang during AQW's very first birthday celebration event. Some of you know him as the leader of the dogmatic Golden Onslaught whose only goal is destroy any and all things EVIL, no matter what the cost. 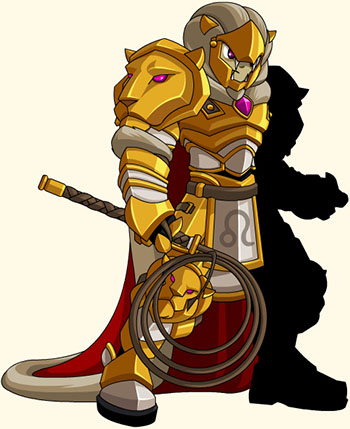 This Friday, we are turning back the clock and re-introducing AQW to General Lionfang, before he took up his banner against evil. This quest takes place before the events of the first birthday event and NEXT week we get the pleasure of re-introducing the event with expanded content for those who missed out. It's kind of cool that we get to go back, touch up old stuff and bring it back to the game as a core element of a much larger storyline.

First, a little history about the Lionfang family.

Maximilian Lionfang and his younger brother Xavier were raised by their father, Darius who served for many years as a knight under King Slugwrath before joining General Alteon's rebellion and becoming a key player in the overthrow of the tyrannical king. Darius raised his boys to believe that you should stand up to evil wherever you meet it, but his guilt over his actions while serving under Slugwrath drove these teachings to extremes.

In the early years of King Alteon's reign Maximilian and Xavier both signed up as recruits under the good king but Maximilian rose quickly through the ranks by making a name for himself as someone who could get things done. Darius Lionfang was slain in a battle with the archlich Noxus in one of the first clashes between King Alteon's forces and those of the DoomKnight Sepulchure.

Xavier left the military to seek revenge for their father's death but Maximilian remained a loyal soldier thinking that the far-reaching hand of his majesty's army would prove a better tool in the battle against evil. His charisma and steadfast adherence to the cause of good earned Maximilian a General's banner and a fearsome loyalty from those who served under him but some of his soldiers whispered that he could take things too far. However, most knew how his father had died and thus turned a blind eye to his all-consuming hatred of Evil.

Now Maximilian is one of Good King Alteon's most trusted generals. When Drakath attacked and Sepulchure was destroyed, Lore saw that a new, powerful threat had arisen that could not be defeated by the forces of good or evil alone and  the Great Truce between Good and Evil was formed. General Lionfang was charged with finding out all that he could about the nature of Chaos on Lore. For years he and his troops have scoured the land searching for clues and finally building Lion's Keep on the edge of Thunderforge, a dark and mysterious land north of Skullholm populated by numerous creatures who serve Empress Gravelyn.

His recent letters to his majesty hint that he might have found something in his search to battle Chaos in an ancient tomb called Blackhorn...

A New Contest Is Coming!

So I was talking with Artix and Alina and we came up with an idea. We were thinking that I might take a lot of my old rares and offer them up as prizes for some sort of drawing. My Alpha Pirate has just been gathering dust since I got it up to rank 10.

The contest that we're thinking of will be kind of similar to the old I Can Has Mod contest in that you will get to hang out with a mod or dev for a few hours and you'd also get to pick from a list of old rares that I and the other mods and devs have donated as prizes. That's where the similarities end.

There will be no wishing of any kind, other than the normal, fruitless kind that always happens.

You'll have to buy a ticket or a potion and have it in your inventory at the time of the drawing,Membership will get you 50 extra chances and each completed AExtra will get you 1 more chance to win. We'll do the drawing once a month and random winner will get the option of being named or remaining secret of they want.

We'll tell you more (like when the contest starts and what you need to have in your inventory to be in the contest) as soon as we figure out more details ourselves.

We are considering calling the contest SHUT UP AND TAKE MY RARES! 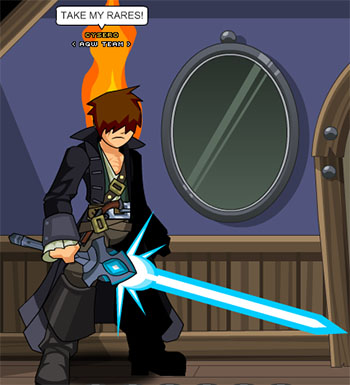 We have already discussed this idea on Twitter a little bit and I'm really impressed with so many old school players stepping forward and volunteering their own ancient rares for no reason other than they want to make someone else's day.

It's great to know that we have so many amazing players like you guys, but let's see how it goes with the devs and mods first :)