As you probably already know, I love delivering happiness, smiles, hugs, pink cute thingies, and warm fuzzies in-game and in real life =D I always have a positive upbeat attitude and loveloveLOVE all my wonderful Heroes who play my favorite online fantasy game with me!

But YIKES! There is something—or um, someone?—who is going to sap that joy right out of me AND you, too. He goes by the name of Grimskull, and he’s the EXACT opposite of yours truly! 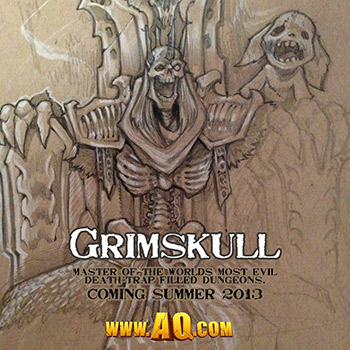 Grimskull has made a career creating the world's most evil, vile, death trap filled dungeons. And next weekend, Grimskull is getting a promotion: opening his dungeon doors to players like you!

Legend states that the world's most powerful weapon lies at the end of Grimskull’s dungeon. A weapon so powerful that it makes the Blade of Awe, DoomBlade, and the Blinding Light of Destiny look like squeaky balloon swords.

Even if you are the ultra-mega insanely-crazy Hero who storms headstrong into any battle… who is foolish enough to enter Grimkull’s dungeons?