We've learned a lot from the PvP Testing Period which lasted WAY longer than it should have. Sorry. If you were one of the PTR PvP testers, you will notice that we have added a room where you can rest to the BB map (You used to rest IN the boss room... made the matches go on for a LONG time).

You will also be able to get new item rewards from Dumoose, our PvP Battle Master. Some of which will only be availible until we chance the PvP map again, and some will be permenant additions to the PvP. One of the upgradable weapons will be upgraded versions of the Vampiric Nightshade which, rumor has it, Edvard is currently in possession of. New upgraded versions of the weapon will be available only through PvP.

BB is STILL one of the best PvP maps we've designed to date, but we're always looking for new ideas. If you've got an idea for a PvP map, let us know on the forums!

Friday The 13th Is Coming For You 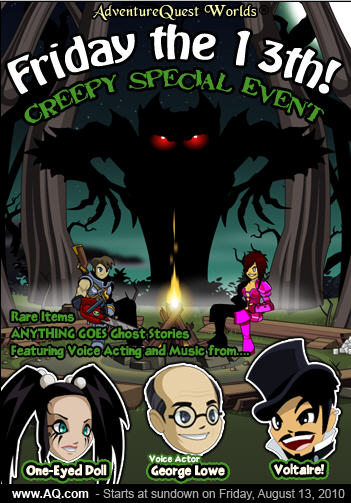 Preparation and even more preparations are going into this event. It has the largest amount of voice acting that we've ever had, blowing the One-Eyed Doll event out of the water in that area. This this is shaping up to be more like a playable horror/50's sci-fi/B movie than an AQW Event.

Preparations for the LONG CON!

Only 28 more days until DragonCon! This year we have a 3 hour panel (which Artix and I will probably fill most of with our ceaseless babbling... I will also make Beleen babble some). As usual there will be Q&A, Trivia, Free Candy and other AE related swag, an AE costume contest, and other things like those things I just said.

There will, as always, be a free item that anyone who goes to the panel or finds us walking around the con gets just for saying 'HI', and as usual, we will ask those of you who attend what you would like as your free in-game item. Then we will tell you 'No', when you ask for a free class or enhancement that can kill anything in one hit, then we will ask for other more reasonable but still pretty cool ideas.

I really mean it when I say this: I hope to see you there.

It would be cool if I could meet every single AQW player in one place at one time. We'd rock the house.

Last year it was my pleasure to sit down with have lunch with Sunumbrella on the first day we met her. If I could I'd buy lunch for all of you and we'd all sit down and have a fun chat about AQW, life and everything in between.

She came all the way from New Zealand so you've got no excuse! I even bought her a shirt. Be there!