Many, many moons ago when Dage The Evil was still the loyal servant of The Archfiend, he created an armor called Dark Caster. At the time is was the pinnacle of his craftsmanship and many, many people desired it. Through the secret halls and corridors of the internet it was promised to those who obtained this item, that one day in the far-flung future the next evolution of this armor, Dark Caster X would be theirs.

Things happen and plans change. Through many discussions and much planning the idea of Dage's Dark Caster X eventually evolved into a class rather than an armor. But people were still howling for the Dark Caster X so the armor was created and released for all. But Dage had not forgotten his promise to those who bear the original Dark Caster. It would be no mere armor that they would inherit, but a full Dark Caster Class with it's own Legion based skills to better serve their master, Dage.

Nulgath's army proved too much for the mighty Undead Legion and Dage The Evil has failed in his attempt to overthrow Nulgath. A rift was opened to another world rich with possibility and ripe for corruption. Nulgath has tossed aside the war-torn scraps and left Lore to inhabit, spoil, shape and eventually conquer the rich world of Oversoul.

Dage is still nursing his wounded pride and the Underworld is not as enticing as it once was, being given to him a pitiful trophy... a reminder of his great defeat. But his eternal rage still burns a cold, blue flame in what remains of his soul and he has already begun rebuilding his army.

The Dark Caster Class finally arrives today and all those who posses the original Dark Caster armor are called to Dage's service once again. The skills will soon be yours to master. 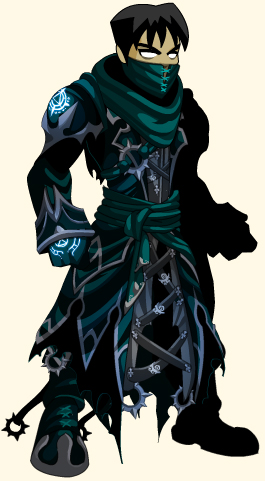 As we've mentioned before... a lot... ONLY people the ORIGINAL DARK CASTER armor will be able to obtain the Dark Caster Class. There will be no AC version and no other way to get it.

For the most part with AC items like the original Dark Caster armor, you get what you pay for. However, on VERY rare occasions there is an item like this that will allow you to get more than you paid for. You may think it's unfair that you signed up after the original Dark Caster armor had been released or you didn't know at the time that it would unlock anything else but a promise was made and a promise will be kept.

Did you really expect fairness from Dage The Evil?

How Do I Get The Class

There are only about 4000 people left in AQW who still have the original Dark Caster Class. If you're not one of them, you don't need to read any further. If you are one of the very few people (4000 is a very, very small number of AQW players) who still own your Dark Caster then you probably want to know how you will get the class.

Dage tells me that there will be at least one quest and probably some Legion Tokens required to obtain the class from him in Shadowfall. The Dark Caster armor will need to be in your inventory in order to unlock the quest or quests that will grant you the class.

You will NOT be required to turn in the armor. You only need to have it in your inventory.

Dage and I spoke for a while about what he expected out of the class. Obviously it was to be a caster. Single target DPS with some survivability, but not a tank. He wanted some interactivity which requires his Legionnaires to do more than mash buttons to gt a kill BUT he wanted the skills to have fairly short cooldowns so you had to pay close attention and act quickly. He wanted people to use it in PvP so it needed a guaranteed stun but it had to be a stun for which you worked.

Since it is a caster type and all of the skills are magical you should slot this out with Wizard Enh.

I think I designed a class that matches all of his expectations. Here are the skills.

This class starts off with a moderate damage ability instead of a light one which will make ranking it up a little simpler. The debuff isn't super-powerful but just enough to give you an edge in battle. The real joy in this skill is the 4 second cooldown. The cherry on top comes in the final ability.

A blast of charged spirit hits your target for light damage. Also applies Soul Burn which stacks up to 5 times. Each stack causes your target to take more damage. Soul Burn replaces any stacks of Soul Crush.

Another damage skill with an even faster cooldown, but less damage than the first still. Another mild debuff but now that you have this skill you are forced to decide which debuff you like better. Again, the real value in this skill comes the last ability in the class.

Regain some mana over time at the cost of losing health over time. Also increases your damage output for a short time.

You Necromancers will recognize this skill. It makes sense considering the Dark Caster's close ties to the necromantic magic that keeps the Legion up and walking around. When you use this skill your life slowly drains away as your mana slowly refills. Once again, you need to watch your HP bar to make sure that you don't kill yourself but if you juggle this with the soon-to-be-revealed healing skill then you'll be OK.

Those of you who have gotten this far in Skyguard Grenadier will recognize the way this skill functions.

In addition to the nice high damage that you get from the skill itself, this skill also has additional properties depending on which of the first two skills you've used. If you have three stacks of the first skill then Legion Strike will stun your target for 4 seconds. You can USE those 4 seconds to get one more stack on them and try to stun lock your foe but you will eventually run out of mana.

If you have the second skill stacked then you get a heal which will be progressively larger depending on how many stacks you have of that light damage second skill. Using this skill will balance out dark conversion and you can try to bleed your opponent's life away with light damage (and the rare HIGH damage from this skill) but you lose out on the higher damage from the first skill, not to mention the stun.

Here are a few tips: I find that 4 stacks of Soul Burn is plenty to keep you alive through combat AND Dark Conversion. I won't wast time on the 5th stack unless you're planning something big.Don't be afraid to mix up which skills you use but remember that every time you use one it negates the stacks of the other so think ahead.

Rarely, you will focus all of your dark power into one MASSIVE damage attack, but it will consume all of your mana and half of your remaining life.

This is a VERY large attack but it's balanced out by the fact that it pretty much leaves you open to any incoming attacks. I would carry a few potions around if I were you.

That's it. It's pretty fun to play since it keeps you on your toes and it's a good boss class and can be a decent PvP class if you play it right but I don't think that anyone will be complaining that it's over powered.

We've got more than the class coming tonight. The next chapter of The Span is coming plus Quibble is on the way with a bunch of items pulled from the timestreams of our other games, and we have a new Matomy (AExtra) offer starting tonight which could win you several thousand ACS OR the grand prize of a set of the rare, collector's edition Black Artix and Sepulchure action figures!

Be sure to come back clear to the release and read Alina's Design Notes on tonight's release for more details!

125 days until Just Another Day