One of the most requested features was just added to AQWorlds this afternoon... Class Point and Reputation boosts!

These are temporary boosts to your Class Points and Reputation. They will help you rank up your class skills faster as you go through the game and get new classes, and Reputation Boosts which will DOUBLE the amount of reputation you earn with ANY faction for as long as the boost lasts. 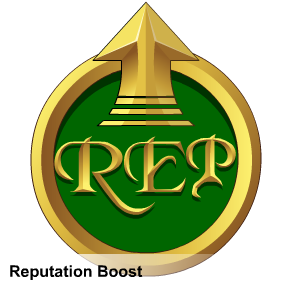 Right now these 10 minute boosts can ONLY be acquired from the randomly appearing SponZard Button which rarely appears in Battleon.

If you didn't know about SponZard, it's a button that allowes you to watch a sponsored ad, then you get a free item, potion or boost.

The button is tied directly to the company that finds people who wants to advertise in AQW, and we have no control over how often it appears or for whom it appears. It all depends on luck and where you live. Let me explain why that is.

The advertisers pay us to give you these items for free so they want to make sure that their adverts reach the right people. If you live in Japan and they are advertising a soda that you can only get in Egypt, it wouldn't do them much good to direct ads at you, so it could be that the button will only appear in Egypt and countries around Egypt in this purely hypothetical case (no Egyptian Sodas are currently being advertised). AGAIN: We have no control over where these companies want to advertise. If you don't see the SponZard Button when you log in, it could just be luck or it might be where you live.

What If They Never Advertise In My Area?

Fear not, pretty soon (By mid-Sept at the latest) we will be adding 1 HOUR versions of these new boosts to Itsachi in Battleon to be purchased with AdventureCoins.

That means, if you are a member and have access to the Member Only daily quests in most areas, one of these puppies will go a LONG way to helping you reach Reputation Rank 10.

Tomorrow is the latest update to the SkyGuard Member-Only area! Brand new Skyguard items and armors and an interesting new area awaits you as you dive into the realm of dreams and nightmares.

Mennace is also trying his hardest to get out some new Player Suggestion items, once again taking up the artist's call to take some of the less advanced suggestion art and raise it to a new level of epic in his own style.