OMGOMGOMG Friday the 13th is coming up in a few days! And TRUST me—it’s so intense that it’s going to rock Cysero’s socks off. C’mon now; George Lowe is ganna be there. AND Voltaire. AAAND Kimberly from One-Eyed Doll. You know it’s going to be the best Friday the 13th Event ever. And if you didn’t already know… now you do!

I have been sworn to secrecy about this Event. Artix specifically told me to NOT say anything about what’s in store. But... as long as you don’t say anything… I won’t….. so *cough cough* Members are ganna be able to access exclusive content *cough cough cough* from special items to a super-hard monster battle and hilarious outtakes from George Lowe himself!

So if you’re a Member already… GRATZ! You’re ganna experience something unlike ANYTHING else we have ever done in game. But if you haven’t yet Upgraded… now is a great time to! Best Buy stores nationwide are here to help you out for this Event! Yup. That’s what I heard, at least ^____^

From now until August 21st, a Best Buy store near you is offering Artix Entertainment Upgrade Cards at a 10% discount. And as if that isn’t a sweet enough deal, let’s throw in the awesome Best Scythe weapon! This weapon is ONLY given to players who Upgrade their account using an AE GameCard purchased from Best Buy. 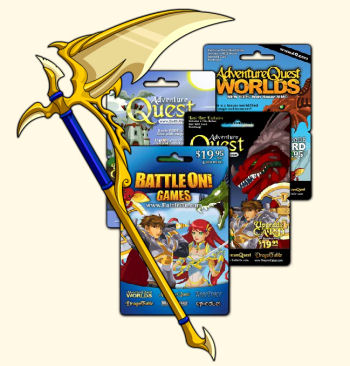 It’s about to get sentimental!

All of us here at Artix Entertainment want to truly thank everyone who helps support our games =D Without your kindness, none of this would ever be possible. Ever! It is because of our dedicated Members that we get to release new content every week and are able to host special Events. We are truly honored that you love our games enough to support them, the Team, and Artix’s growing optometrist bill from the massive amounts of pink that destroy his retinas. Wahaha >:D

I have the best job in the world. And the best players to back it up with. Thank you, everyone, and I cannot WAIT for Friday the 13th!