Begin your Prowl as a Werejaguar!

Tuesday is here—and you know what that means: an all-new Limited Time Featured Artist Showcase Shop has arrived!

This week is dedicated to Mido, local Werejaguar and graphic designer for AdventureQuest Worlds. Mido has just released a ferocious fury of Werejaguar-themed items passed down from his ancient ancestral kin. 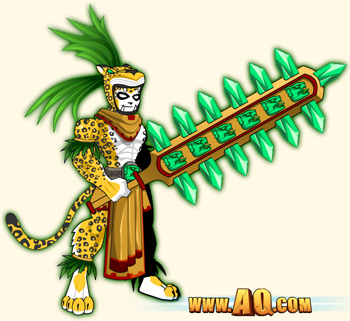 Artix Entertainment is an equal opportunity employer. We hire all sorts of talent from Bounty Hunters to Mad Weaponsmiths to even… Coffee-Wielding Werejaguars! Mido, former barista and full-time graphic designer, first caught wind of Artix Entertainment when his classmate was playing MechQuest... instead of studying for finals!

After Mido finished school with a Master of Fine Arts in Illustration and a Masters of Arts in Graphic Design, he began his prowl for internships within the video game industry. When he discovered that the local indie gaming company was the same one that produced MechQuest… POUNCE! Mido snagged the internship in April 2010 and became a full-time graphic designer three months later.

Mido’s artistic inspiration comes from years of “studying” video games, cartoons, and comic books. Now all that hard “work” is paying off! Mido enjoys collaborating with a diverse group of people who all share a passion of working hard and playing harder.

Wise words from a wise Werejaguar

Mido would like to share some inspiring words: “Never EVER say ‘I'm not any good’. That's negative thinking. Say ‘I'm working on getting better’ and be proud of how far you've come. Love what you do and show it by never stopping the creative process.”

Give Mido a roar of approval on his Twitter!

Now, get your Jaguar On in Battleon’s Featured Artist Showcase Shop!