Watch This Page for News on AQW Bugs!

Many bugs are issues which we either cannot reproduce reliably, or are engine limitations which we cannot correct with the current AQW game engine.  This FAQ is designed to give some more information on these, and other commonly reported issues.

My House is Broken!

There are a few known issues with houses.  These issues include:

The most common cause of the above issues is spamming your house button.  You may also read these Design Notes for more information.

The Guild Cities were discontinued until they can be reworked as several of the intended functions did not work properly.

Guild names not showing.  This is an engine issue that we have been trying to resolve for quite a while. What is happening is anyone who is in the room when you enter will be able to see your guild name, but anyone who enters after you will not.

Promoting, demoting and removing people.  There are several possible causes of this.  For promoting and demoting, the command may not take if the person is offline.  When people refuse to be removed from a guild, this is usually caused by their name beginning with a 0.  The guild interface does not read that 0 and instead defaults to the next character in their name.  Either AQW Bugs or Artix Support can assist you with these issues.

My movement is restricted like there is an invisible wall.

Clear Your Cache!  This is by far the most common report we get at Bugs and the answer is always clear your cache.  We cannot repeat this often enough.  A stuffed cache causes more problems than every actual bug combined.
We actually suggest that everyone clear their cache at least once a week.  If you play a lot, or spend significant time farming, you will want to clear more often.  Before playing the new release is a really good time to do it.

Map showing a story as incomplete.

In the storyline sagas, this is a visual error only.  It does not affect your progress towards Mount DoomSkull.  As long as your Book of Lore is showing the sagas as complete, you will be able to advance. 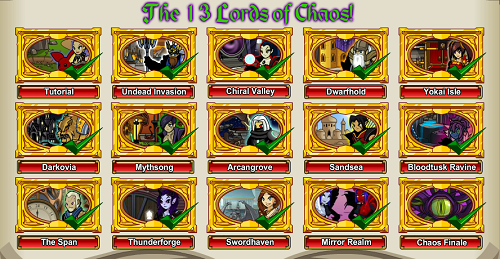 For the stories that require the item drops to take the next quest, this is a visual error only.  Since the quests are dependent on the items, and not anything you have done before or will do after, this will not affect your progress in any way.

The Book of Lore showing stories as incomplete.

There are some stories in the BoL that will not show as complete at the moment.  This error will not affect your progress or gameplay in any way.

I got a drop, but I could not pick it up!

If you deleted or sold an item to make room in a full inventory and it doesn’t pick up, this is generally caused by lag interrupting the signal to the server that your inventory has an open space.  In this case, you MAY be able to pick the item up by opening a quest and accepting it, if you can do so without the item vanishing from the screen.
This issue is most commonly caused by lag.  There are several steps you can take to try to reduce lag as much as possible.  These include playing on a less populated server, playing in private rooms,  changing your settings so that things like pets, capes and helms do not show, setting the graphics quality to low, and not wearing highly animated items when fighting. If you are attempting to get an item that takes a long time to get, consider clearing your cache and relogging.

Class points are awarded on a descending scale.  For each level you are higher than the monster level, 5% of the total possible points are deducted from the award.  This bottoms out at 5% when you are 19 or more levels higher than the monster you are fighting.  If you are not getting enough class points, you need to fight bigger monsters.
You can refer to the AQW Wiki for help with monster levels:
Monsters By Level