Despite their names, Frogdrakes are not descendants of dragons, being more closely related to bats and frogs than anything else. The mistake is an easy one to make, taking into account their membranous wings and horns. 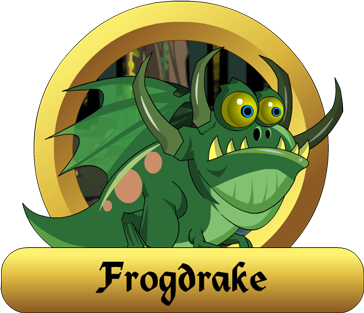 Frogdrakes depend on their long tongue for hunting mosquitos and other insects, and their horns for intimidating larger predators.

They are more apt to flee, rather than fight, but will defend itself when attacked. Despite their amphibian ancestry, frogdrake biology is not at all set up for proficient swimming ability. Frogdrakes go underwater only to run from landbased predators, lay their eggs, and cool themselves.

Frogdrake legs are considered a delicacy in some parts of Lore, and are indeed edible, though they require much preparation in order to remove all of the mucus that frogdrakes store in glands beneath their skin.

Sketches in the Wild

None at this time. Heroes needed to adventure into the wilds to observe monsters!