A Guide for a colorful adventure! 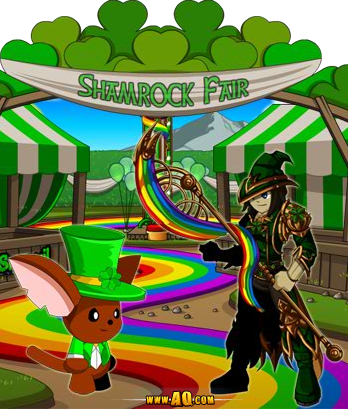 Once a year the Shamrock Fair comes to town with it's games of chance.  Here's hoping the luck of the Mog-lish bring you treasures of chance.  Also Roy G. Biv needs help saving the colors, so /equip your rainbow and fight Monochrome!

Where to go: join /rainbow
Who to talk to: Woodland Faeries
What do to: Monochrome has blasted the Rainbow, help the Faeries make everything right.

Rainbow Rats: Find 10 Pellets from Rainbow Rats.
Monochrome: Defeat Monochrome for the Grey Meter.
Destroy the A.R.C.: Get Lazer Beem from A.R.C.
Frosted Lucky Harms: Defeat Lucky Harms and get his hat.
The Golden Pot: Get this from fighting any monster on the map.

The Shoes News: Get 1 Measuring Tape from Rainbow Rat, 1 Sneevilchaun's Awl from Lucky Harms, 1 Sneevilchaun's Hammer dropped by Mononchrome and 1 Shoeing Tacks from A.R.C.
A Shoemaker’s Work is Never Done: Have Bag-ometer from previous quest, get 1 Sole Knife from Lucky Harms, 1 Stretching Pliers from Monochrome, 1 Burnishing Cloth from either A.R.C. or Rainbow Rat, 1 Shoemaker's Bag from Rainbow Rat.

Where to go: Join /luck or button in Rainbow
Who to talk to: Mog O'Rahilly
What to do: Play games and earn Golden Tickets for prizes!

A-MAZE-ing Race: Find the Small Pot O’ Gold in the Hedge Maze and get the Pot O’ Gold Polish from Monochrome.

Clover Fields: How’s your memory?  Pretty good?  Well click the clover pattern for Golden Tickets.  You have 3 chances to get the highest score. (Legend Only)
Jackpot o' Gold: Step up and test your strength! When the pointer is in the red zone click the button for a strong smash and earn Golden Tickets.
Rainbow Run: Grab that gold! Collect as many coins as you can without falling or tripping.  Speed the Sneevil up by moving your mouse to the right.  Slow down by moving your mouse to the left.  Jump over holes and obstacles by clicking the left mouse button.
Ring Toss:  Ring ring! Want Golden Tickets?  Just get as many rings onto the bottles with 10 chances.  Choose which bottle you want the ring to be on with the pointer then hold down the mouse button.  The higher the red in the bar gets the farther the ring goes.
Smack A Sneevil:  Frustrated at Sneevil’s for taking your boxes? Well let it out by using the mallet to whack as many as you can in the time allowed.
Shamrock Smash: It’s your Luckee day!  Use the LEFT and RIGHT arrow keys to control Luckee and bounce