The 12th Lord of Chaos 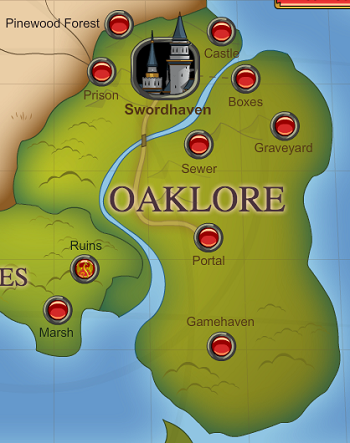 Kingdom under the reign of Alteon.

The next big city on Lore, aside from BattleOn.  Home of King Alteon and his three daughters.  Swordhaven has many things to do including quests from other NPC's like Artix, Robina and Knave1.  Different shops, like Lore's only pizza shop, vendors, and archives.  This is where your storyline quests begin. 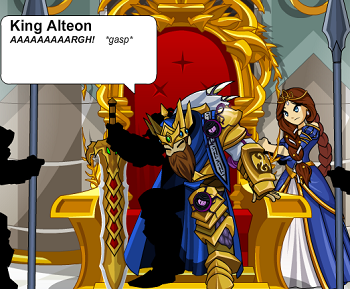 Speak with Denara, the Royal Archivist, and start her quests.

Bandit Bounty: Get 6 Bandit Masks from the Chaos Bandits.

Thwarting the Spies: Collect 4 Unpopped Eyeballs from the Camouflaged Sp-eyes.

Fight Chaos With Clerics: Get 3 Chaorrupted Humors from Camouflaged Sp-eyes, and 3 Clumps of Tentacles dropped by Chaos Bandits.

Locate the Source: Collect 6 Reeking Clues from Camouflaged Spy-eyes or Chaos Bandits, and the Dripping Clue by clicking the map.

Denara has now moved to the sewer entrance to inspect the clues. Make your way back to where you found the dripping clue. You will find new monsters in this newly discovered area.

Still More Research To Be Done!: Ge 5 Vials of Ichor from Chaos Spiders, and 5 Intact Rat Brains from Chaos Rats. 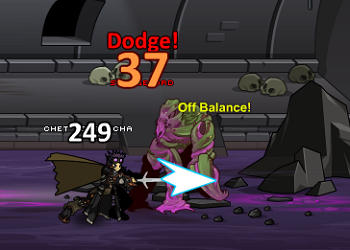 Join the Armory and speak to Griffin to start his quests. After each quest a cutscene places.

Back to Jail With You!: Defeat 10 Chaorrupted Prisoners.

We May Need A Militia: Get  4 Weapon Recovered by defeating Chaorrupted Prisoners and arm 4 Peasants by clicking around the map.

An Ounce Of Prevention: Get 6 Chaos Goo from Chaos Drifters.

Make your way to Rufus to begin the next set of quests in the Armory.

Axe Them To Leave!: Get 3 Sharp Axe from Chaorrupted Prisoners. The quest reward is used in the up-coming mini-game.

Freeze 'Em Out!: Collect 3 Frozen Charm dropped by the Chaos Mage. The quest reward is used in the up-coming mini-game.

Burn 'Em Up!: Defeat the Chaos Mage for 3 Flaming Charms.  The quest reward is used in the up-coming mini-game.

Under Siege: Accepting this quest will begin the Castle Siege mini-game. Follow the instructions provided, aiming with the mouse, clicking to fire, and using A-D or 1-4 to select your weapon.

No, NOW We're Under Siege: Defeat the Chaos General. A cutscene follows. 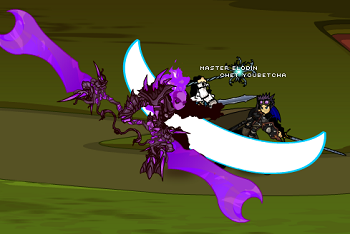 It is now time for Princess Brittany and Lord Brentan's wedding. Head towards the ceremony and speak to Roald who has some quests for you. 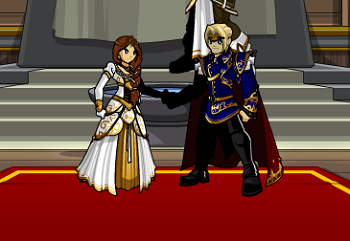 Better Letter Go!: Go to Yulgar's Inn (/join yulgar) and click around the map for Yulgar, Serenity and Hans. Go to the Swordhaven Archives (/join archives) and click for Denara.  Then travel to Swordhaven (/join swordhaven) and click the map for Lady Celestia, Robina, Artix and Barber.

Chaos STILL Not Invited: Get 12 Invader Outvited by defeating the Chaos Invaders

Protect the Princesses: Collect 6 chairs by clicking around the map.

Seal the Chapel: Block the door by clicking the map and defeat 4 Chaos Invaders.

Chaos Kills!: Defeat the Justicar. The quest will automatically turn in and begin the final cutscene, finally revealing the 12th Lord of Chaos. 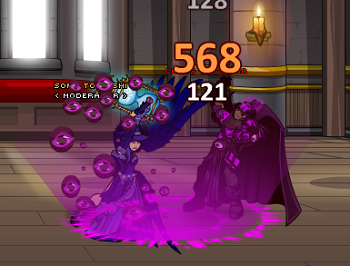 Endless Aisle of Chaos: Make your way up the aisle by defeating every monster on each screen.

Save the Princess... Again!: Defeat Princess Thrall and find out the tragic twist of this saga.

It is time to confront the Chaos Beast and Chaos Lord. Speak to Lady Celestia to start her quests. Before you can face the Chaos Beast, a cutsecene will appear. 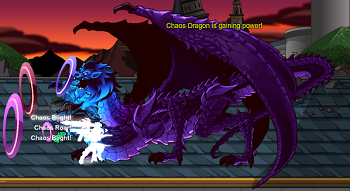 To Catch a King: Defeat every monster on the first 3 screens. The quest automatically turns in. 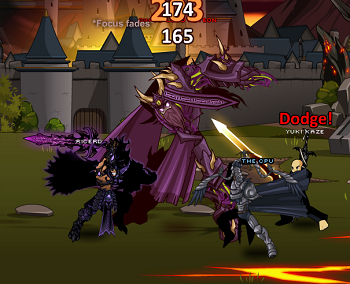 The quest will automatically turn in and begin a cutscene. As Swordhaven lay in ruin, you must decide the King's destiny.

Oh dear. Swordhaven has fallen, the King is gone.  This doesn't feel like much of a victory...