The 10th Lord of Chaos

A futuristic landscape with strangly familiar scenes from history!!!

Area currently is not on the world map.

TheSpan (/join thespan) area is a wonderful mesh of several of the Artix Entertainment games together in one area.  The world was created by Chronomancer who brought all the alternative worlds of AE.  The area includes vendors shops but the saga begins in Time Library.  (Keep a look out for Doctor Who references).

Speak to Golem Warlic for quests.

Time to Learn the Truth: Join TheSpan (/join thespan) and speak to the NPCs for Notes.

Adeventures and Quests: Collect 6 Tales of Planet-peril Page and Necromancy in AQ Knowledge  from Moglin Ghosts and Undead Knights. Click for the Ruby-Eyed Shard.

A Fable of Dragons: Grab 8 Elemental Orb Knowledge and 6 "Draconic Propechy" Page from the Ninja and Togs.  Click for 2 Bone Claw. 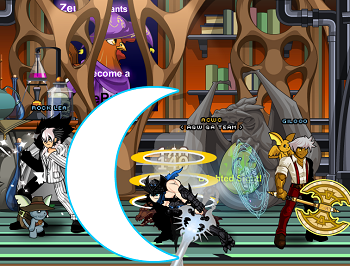 Mechas and Quests: Get 7 Shadowscythe Combat Strategy and Galatic Hypertron Enginess: A Primer from Shadowscythe Pilot and Training Globe. Click for Mysterious Mirror. 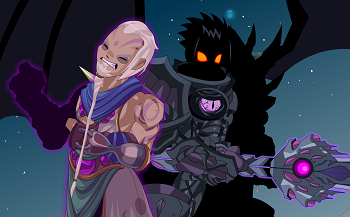 Once again Golem Warlic will guide you.

In a Split Exasecond: Click the map for 16 Fallen Fairy Wings. Get 4 Exaglass and 8 Fairy Plasma from the Time-Travel Fairy.

Time to Prove Yourself: Click for 15 Pre-Solar Scales. Collect 8 Fairy Plasma from the Time-Travel Fairy and get 9 Ephemeral Dust dropped by Ephemerite.

Fill the Empty Hours: Get 6 Dried Phoenix Tears from the Void Phoenix and 6 Powdered Fairy Wings from the Time-Travel Fairy.

Clock of the Long Now: Turn the Hourglasses by clicking the arrows. 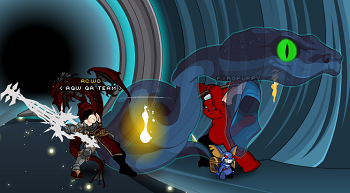 This area is themed after the original Adventure Quest, begin by going through the portal with the blue sphere and talking to Uldor.

Reach the Temple:  Get 9 Obstacle Obliterated dropped by the Ninja.

Not All Hope is Lost: Click for 8 Elemental Orbs and talk to the Tome of Hope in the temple.

Return to where Iadoa and go through the dark green portal and talk to Dr. Ai Pang for quests.

Bolster the Elements: Click the arrows for 3 Shadow and 3 Light of Hope, fight Water Elementals for 3 Tears of Joy and collect 3 TimeSpark from Eternite Ore.

Maintain Elemental Strength: Get 3 Frigid Liquid dropped by Ice Elementals, 3 Heart of Lava from Fire Elementals and click for Adamantite and  Balanced Breeze.

Get Fired Up... or Shatter!:  Collect 6 Fire Orb Shards from the Firezards.

Enemies on Ice: Find the Ice Scythe dropped by the Ice Elementals.

Tek-nical Forging Skill: Speak to Tek in The Span (/join thespan) to forge the claymore. Then return to Drakonnan.

Finally enter the light green portal and talk to Moon Called to begin the final quest of this lesson. 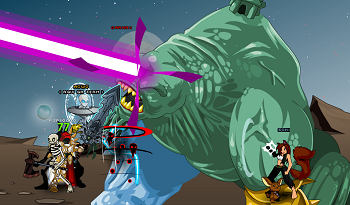 This part is themed after DragonFable, talk to Iadoa to start. This is a maze as each room is random. You can always access Iadoa and his quests by clicking on his face in the top right of the screen, to stop you from having to leave the maze each time. 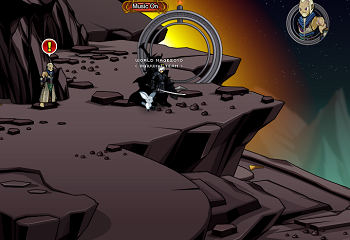 Fight Chaos with Fire!: Fight 8 Fire Elementals and get 4 Chaos Gemeralds from them.

Find the Time to Travel: Collect 4 Life AND the Universe from Togs, get 5 Everything from Agitated Orbs, then get 3 Hoopy Frood's Towel from either monster.

Bone up on the Boss: Defeat 8 Chaorrupted Evil Soldiers.

ChickenCows, Bacon and Battle!: Collect 8 spell runes from Chaotic Chickens and get the Hero Protein from Horcboars. 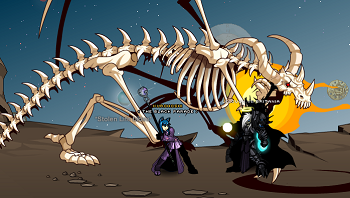 This area is themed on MechQuest. First talk to Golem Warlic. 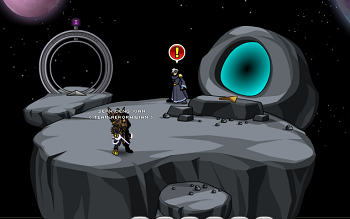 Board the Ship to Your Future: Find the rocket around the map, by clicking on the blue arrow.

Heal the Chaos Lord: You must now play the Blast-OFF! mini-game. It's pretty simple, you just keep travelling through space until you find an Asteroid by clicking on space litter. Defeat 3 Asteroids to complete the quest.

Now find Odessa and complete her quests.  You will have to go past a few screens.

Go back and talk to Worsh now.

Take Flight into the Future: Find Worsh's motto by defeating the Mystraven/Runehawk/Wolfblade Students.

Continue on to the Library and meet Selina to get her quest.

Secrets of the Universe: Collect 3 lecture pages from the Chaos ShadowScythe.

Next is Mysterious Johnson with a quest.

Mysterious!: Destroy 13 darkness and find the Truth Glasses all dropped from the Chaos ShadowScythe.

The 3rd Proto-Chaos Beast: Defeat the Dragonoid. It is worth getting the Dragonoid of Hours from this boss, as it will help you in a future battle. 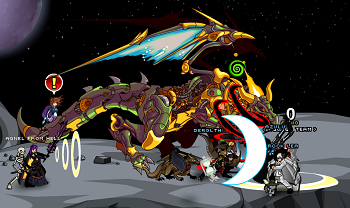 Golem Warlic has your quests.

Music of Nightmares: Click the area for 3 Nightmare Pipes. 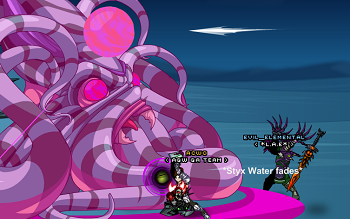 Iadoa has fallen to Chaos, speak to Golem Warlic for your final quests. 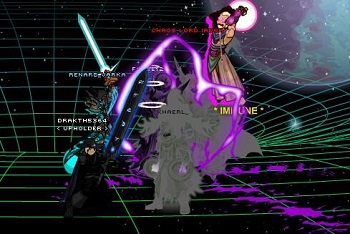 Fantastic! Although Iadoa fell to Chaos, you were able to beat him!