The 2nd Lords of Chaos

THE FOLLOWING CONTAINS SPOILERS TO FUTURE ZONES.  SINCE CHAOS IS UNPREDICTABLE WE DID NOT FIGHT XING AND XANG UNTIL MUCH LATER IN THE STORYLINE.

IF YOU DON'T WANT TO BE SPOILED SKIP TO THE NEXT SAGA!! SKIP TO THIRD  SAGA!

Xing and Xang first make an appearance when the Hero is stuck between siding with Good or Evil. Drakath chaorrupts them and makes them his newest Chaos Lords. Their plan is to aim two meteorites at Battleon to destroy the town. You can replay all the events of Xing and Xang's introduction as well as Battleon's move to GreenGuard Forest by speaking to Warlic in Battleon Town (/join battleontown).

During Nythera's Saga, the Twins tempt Nythera with Chaotic powers leading to Nythera rebelling against the Hero and fleeing to the Void.

The Chaos Twins next appear in Bloodtusk Ravine. It is revealed that Drakath swapped the Good Xang with the Mirror Xang to make the Xing and Xang in the normal world of Lore both Chaotic. The Chaos Twins cause the Bloodtusk war by chaorrupting Khasaanda's and Krellenos's younger brother. This causes the Trolls and Horcs to break their alliance and return hating each other and the Hero as well. Later on in the saga, the Twins also chaorrupt the Good and Evil alliance generals and turn them against the Hero. 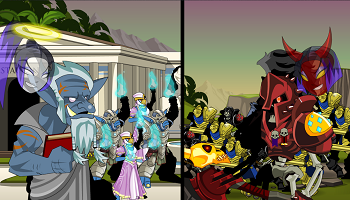 During The Span, the Chaos Twins turn Iadoa's Golems against their creator to start a war. They later help Iadoa succumb to Chaos and become the Chaos Lord he is meant to be. 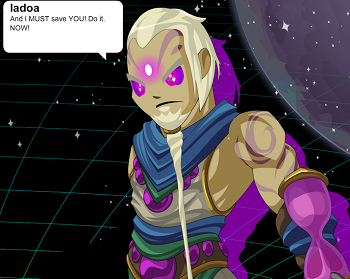 In ThunderForge, Xing and Xang appear before Maximilian Lonfang after he has been defeated by the Hero and the alliance of Good and Evil to turn him Chaotic and, ultimately, the 11th Chaos Lord.

Finally after the 12th Lord of Chaos, the Chaos Twins saga begins.  Got to love chaos right? For this saga you will enter the Mirror Realm and journey to BattleOff which is a mirrored version of BattleOn.

Here you will meet Drakath, Champion of Order, he will have your quests.

Spare Parts: Collect 8 Spare Parts by clicking around the map.

Power It Up: Collect 4 Battery from Evil Moglins.

Filthy Creatures: Get the Magna-Gem from any Evil Moglin. 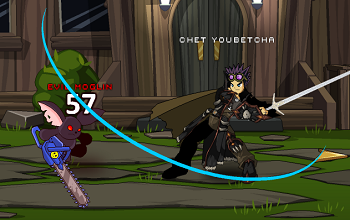 Talk to Gravelyn the Good, who has some quests for you. BrightFall is the mirror version of Shadowfall.

Help Where it is Needed: Heal 6 Doomlight HighLords by clicking on the blue arrows.

Bring A Ward To A Swordfight: Place 8 Wards by clicking on the blue arrows.

Cut Off The Head: Defeat the Painadin Overlord. 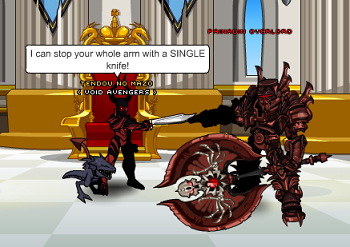 Overworld is the mirror version of the Underworld.  Speak to Dage the Good for quests.

One Ring: Collect the Signet Ring from Undead Minions.

Severing Ties: Get 3 Soul Freed from the Undead Mage.

Whats His Endgame?: Collect the Battle Plans from Undead Bruisers.

A Stopping Block: Get 3 Soul Freed by fighting any monster.

Alteon's Folly: Get 3 Soul Freed by fighting any monster.

DoomFire: Get 10 DoomFire by fighting any monster.

Spoiled Souls: Get 3 Soul Freed by fighting any monster.

Purity of Bone: Gather 10 Bone Dust by clicking on the blue arrows. 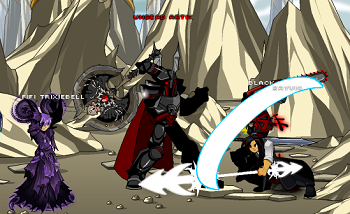 Travel to the RedDeath Swamp, the mirror version of GreenGuard Forest, to continue the story. Here you will meet Bardolph. Start his quests.

I Can't Touch This: Collect 6 Monstrous Life Force from any monster in the area.

First We Need a Beacon...: Collect the Reasonably Clean Swamp Water by clicking on the blue arrow.

Light It Up: Get 8 Flame Gland from Fire Leeches.

...Next We Need a Trap: Get 10 Sticky Webbing dropped by Grim Widows.

For Spirits, Not People: Collect 10 Viscous Ectoplasm from Swamp Wraiths.

It is time for the final showdown with the Chaos Twins, afterall these years. Journey to BrightFall (/join brightfall) to witness a cutscene, before travelling to the Mirror Portal.

You will get your quests from Mirror Drakath's Reflection.

Craft a Better Defense: Speak to Alina in Battleon Town (/join battleontown) by clicking on the blue arrow.

Reflect the Damage: Collect 5 Reflective Fragments from Shard Spinners in Earth Storm (/join earthstorm). Repeat until you get the Perfect Prism. 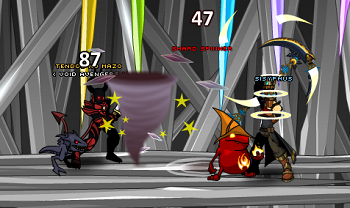 Pure Chaos, Corrupted Blood: Collect 5 Vials of Blood from any of the monsters in Bloodtusk War (/join bloodtuskwar). Repeat until you get the Unchaorruted Sample.

Enemies of a Feather Flock Together: Collect 5 Feathers from Chaos Tigriffs and Chaotic Vultures in Bloodtusk War (/join bloodtuskwar). Repeat until you get the Harpy Feather.

Ward Off The Beast: Turn in the Perfect Prism, Unchaorrupted Sample and Harpy Feather to Alina to receive Shriekward Potions.

Horror Takes Flight: Defeat the Chaos Harpy. Use the potions after the Chaos Harpy has used its powerful shriek attack. Completing this quest will automatically start a cutscene. 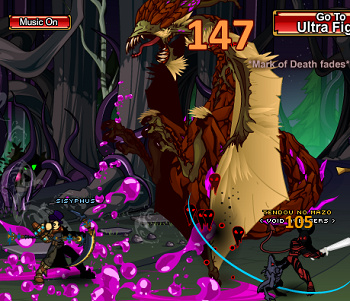 Good, Evil, and Chaos Battle!: Defeat Chaos Lord Xiang. The quest will automatically turn in and begin the final cutscene. 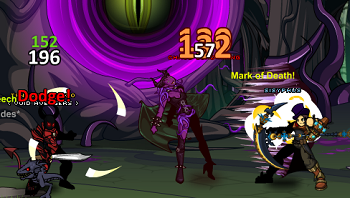 Xiang is free! But that does not mean the battle against Drakath will be any easier.