The Curse of the Phantom Pixel: 12th Anniversary Event!

DING! Artix Entertainment just leveled up! Thank you so much for being with us as we celebrate our 12th anniversary with special events happening in 7 of your favorite MMOs and RPGs. Complete "The Curse of the Phantom Pixel" event to unlock... Quest to recover 7 of the 13 cursed artifacts in AQWorlds:

Once you have recovered all 7, talk to Artix to merge them into the Omni Artifact!

Artix has been cursed, and is stalking the wilds with the ShadowFire Axe of Curses!

Capture Thok with the Cursed Phoenix Blade... if you DARE!

Enter the Wastelands to find a scrap of the Mysterious Necromancer's cloak!

The 12th anniversary event is heating up... and so is Hottica's zone!

The Cursed Tape Reappears... will you watch?

The Ultimate Prize: the OmniKnight Blade! 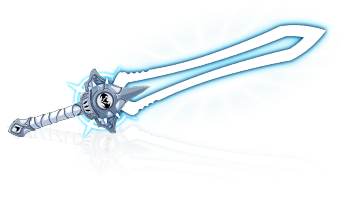 After you've recovered all the artifacts listed above:

Head to the Portal Site and log into your Master Account.
Go to the Quests tab to check your event progress. You are looking for 7 green checkmarks. If a game is not checked off, you have not found the artifact in that game. 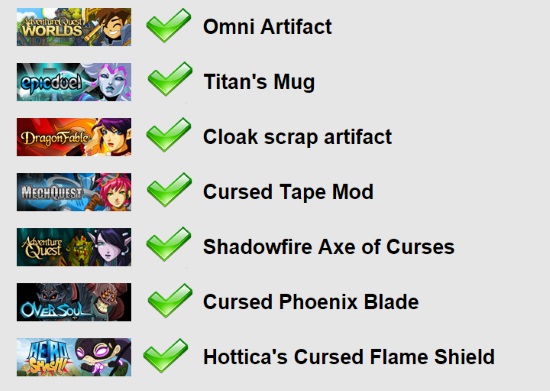 If you DO have all 7 checkmarks, you'll see a box appear saying "Congratulations! You have found all the cursed artifacts!" 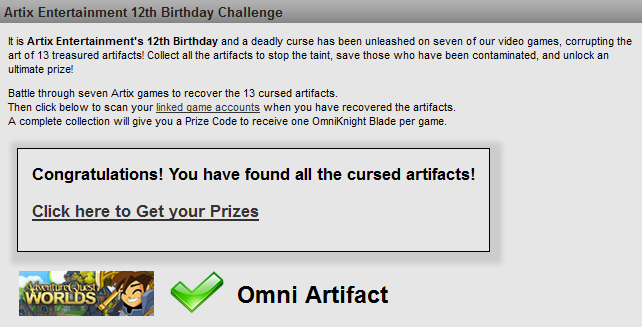 Click the link that says "Click here to get your prizes!" and you will go to your Achievements tab. You should see "Artix Entertainment 12th Birthday Event" achievement under "What's New?"

Click that to get your prize code, then go to the "Redeem Codes" page to unlock the OmniKnight Blade in each game!