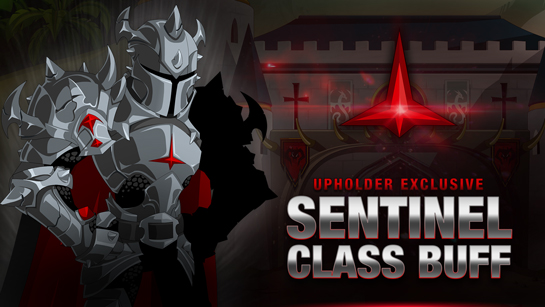 An unavoidable, devastating melee-ranged attack unique to the ever-vigilant Sentinel. Grants a stack of The Watch Eternal for 15 seconds, stacks to 10. If Castellan Doctrine is present, applies Overwatch, reducing your target’s outgoing physical damage by 4% for 10 seconds, stacks to 3. If Venator Doctrine is present, applies Beholden, reducing your target’s Hit Chance, Crit Chance, and Dodge by 15% while increasing their damage taken by 15% for 10 seconds.

Once you don the traditional armor and armaments of a Sentinel, the voices of those who kept watch long before whisper to you, allowing you strike with all your might with each blow as well as gain and apply various effects based upon which Doctrine you currently profess. This auto attack is a passive means of cementing which style you want to be in with various buffs and debuffs.

An unavoidable, guaranteed critical strike that deals moderate physical damage to a single target based on your current health. Applies Sentinel’s Strike, decreasing your DoT damage taken by 80% for 15 seconds. Also applies Defensive Stance, a moderate HoT for 7 seconds. Lastly, applies a stack of The Watch Eternal. Replaces Offensive Stance.

Your first skill deals damage equal to your current HP number and is your first toggle, allowing you to enter or switch into your Defensive Stance. While entering this playstyle does mean you give up on some damage output, you instead gain a heal over time, and can even nullify most of Self-Disregard by way of a huge reduction to all incoming Damage over Time effects, not just your own Self-Disregard.

Deals damage that is increased the lower your health is. Applies Offensive Stance, increasing your Crit Chance by 10% for 7 seconds. Also applies a stack of The Watch Eternal. Replaces Defensive Stance and Sentinel’s Strike.

Active Endurance is your other toggle, allowing you to enter or switch into Offensive Stance. Entering this Stance means you take full damage from Self-Disregard but this only plays what you want, as an increased chance to deal Critical Hits pairs very well this skill’s ability to deal increased damage the lower your health becomes.

Applies Adrenaline Rush, increasing your outgoing physical damage, STR, and END by 50%. You also suffer from Self Disregard which applies a DoT on yourself for 15 seconds. If you are in Defensive Stance, applies Castellan Doctrine, decreasing your incoming physical damage by 20%. If you are in Offensive Stance, applies Venator Doctrine, increasing your END by 40% and Hit Chance by 20% while reducing your mana costs by 25%. Both Doctrines last for 15 seconds and consume each other.

A throwback to the old Adrenaline Rush, self Damage over Time and all. Once you select a Stance, Adrenaline Rush then applies a Doctrine, completing whichever playstyle you want. Castellan Doctrine’s damage reduction allows you to more comfortably control incoming damage, while Venator Doctrine’s Endurance buff means your health always counts as being low, increasing Active Endurance’s damage. It is important to note that Adrenaline Rush does deal minor damage to you upon use, which can both be a useful tool when wanting to control your health, or a detriment if you overuse it.

You perform a single strike for massive damage based on the number of The Watch Eternal stacks you have while consuming those stacks. Also consumes Sentinel’s Strike, Defensive Stance, Self-Disregard, Castellan Doctrine, and Venator Doctrine. If Castellan Doctrine was present, you will be healed after 1 second. If Venator Doctrine was present, you will be greatly healed after 1 second.

Purge the Wicked deals more damage with each stack of The Watch Eternal, an aura that every other skill except Adrenaline Rush grants. This skill sees different usage depending which Stance you are in. Defensive Stance typically allows you to build up more stacks of The Watch Eternal, while Offensive Stance greatly appreciates a larger heal and an instant stop to Self-Disregard.

As one of the most-requested classes to be buffed, Sentinel is in an interesting position. While it is certainly deserving of a makeover, it is also a class that is very easy to obtain by anyone. As such, this class is intended for players of around level 25-50 and gives them a powerful option at their level to tackle bosses typically found in weekly releases.

The main point that might stick out to some is how Sentinel instantly nullifies most incoming Damage over Time damage. This class also packs some unmissable skills and sizable debuffs that do not require stacking. While it is no means a meta-breaker, these mechanics were given to Sentinel to allow it to perhaps carve out a niche for itself.

It is an easy to use class that does not require a large amount of attention, yet it remains flexible, and even allows for some mix-and-matching as the situation requires, as a player does not need to actually stay in Defensive Stance after obtaining Castellan Doctrine, and the same goes for Offensive Stance and Venator Doctrine.