We hope you had fun!

Yesterday we did a live draw with DragonFable, MechQuest & HeroSmash artist Thyton. A video of his art room at the secret underground lab was broadcasted inside AdventureQuest Worlds. It was really fun! Everyone on chat said Thyton looks like Vin Disel... Ichidori posted this on his Twitter. 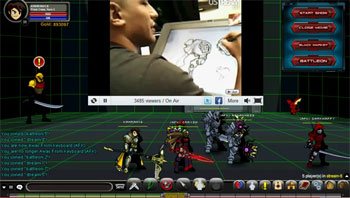 As usual, we ran into a huge slew of unexpected problems... the first one being that we were unable to setup until just 30 minutes prior to the event! ...our HD camera broke so we used a tiny web cam instead. There were a lot of laughs... but unless you had super hearing abliities it may have been hard to hear through the distorted time-delayed sound. You guys are awesome though -- you stuck through it anyway. Over 5 thousand players watched as Thyton draw what they suggested.  An EbilCorp tree ninja was hiding in the background for 30 minutes of the event and finally attacked Thyton. Zhoom appeared and took care of the EbilCorp Ninja.... "I don't like dem Ninjas". Just do not tell Zhoom that Thyton is a Ninja too, ok? ( I REALLY wish we had recorded this event) Cysero, Beleen, Ai No Miko, and Thyton also made a quick appearance. We hope aspiring artists found inspiration and hopefully learned something useful. (Other than to not let Artix hold the camera *shake* *shake* *shake*) If you were unable to join us, do not worry -- I have a feeling we will be doing this again soon!

1st Drawing: Panda Cannon
Beleen was sitting in the couch across from Thyton with her laptop. She was logged onto the Sir Ver server where players send an endless waterfall of purple tells to her screen. She read as best she could -- asking questions and making suggestions to Thyton on behalf of the players. The 1st drawing... as suggested by players, was a Panda launching cannon! Please note the functional accuracy right down to the panda cartridge dispenser. This will be available in HeroSmash (which is currently in open stress test) as an arm item, and in AQWorlds as a back item! 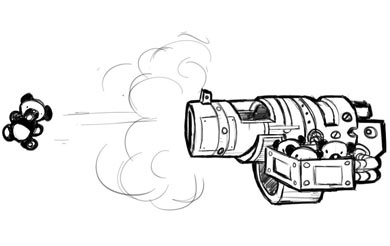 2nd Drawing.... Ninja Bot with Waffle Shoulder Pads and Spiky Hands!
The second drawing combined the player suggestions of Ninja... Robot... Spiky Hands... and waffle. There is still a high demand for a Waffletana (Waffle + Katana). But how would he hold it? 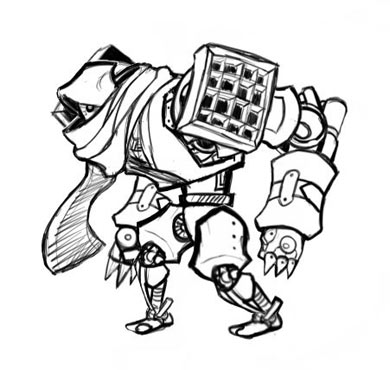 For Thyence! (Thyton Science?)
I would like to thank Thyton for allowing us stream live video of him drawing, unscripted, with thousands of players watching his every potential mistake. No pressure or anything!  I liked his quick draw with only a few minutes left. Thyton said afterwords (when we shut off the video and did not know the sound was still going /facepalm) that he wished we could have done it for a few more hours. He really wanted to draw more player suggestions for the game. It was really fun! Many players told me that liked seeing that the AE team was made of real people and surprised that we were so goofy and fun in real life too. So if you guys agree... I would like to fix our video, audio, and technical issues and have semi-regular "Live Artist Drawings" with ALL of our various artists streamed in game. Maybe even a competition. Maybe even take you around the lab and show you what I do? O_O

Thanks again everyone. Look for these drawings to show up in HeroSmash soon, and for the Panda launcher to appear in AQWorlds in next week's release! If you have any cool ideas, please let me know on the Forums or on Twitter! Tonight in AQWorld's release... the adventure continues and Zhoom is in a wicked cutscene!