A long time ago a group of monks discovered a way to manipulate time. After several centuries they perfected incorporating it into their martial arts developing their on distinctive fighting style, the Way of the Clock. It focuses on stealing time from the lives of your enemies to add to their own thus earning them the title of Thieves of Hours. They use the stolen time to gain valuable hours, days, weeks, years and even stolen centuries which they, in turn, spend perfecting their art. 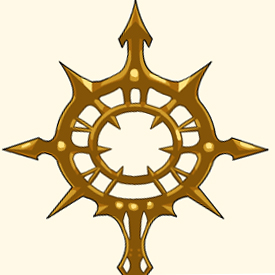 The monks chose the sun as the symbol to represent their order, as the sun's relentless march across the sky day after day is the ultimate representation of time incarnate. Just ask anyone who owns a sundial.

Before he became chaorrupted Iadoa spent many years with the Thieves of Hours in their home outside of time... the Temporal Temple. He learned their arts which he combined into his own chronomancy and now that Iadoa is a Chaos Lord the Thieves of Hours have arrived at this point in time to stop Iadoa from using their secrets to destroy reality.

There's some AWESOME stuff going on with this class so just bear with me until you try it out. 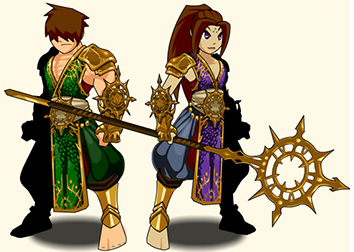 This is a NON-MEMBER class so anyone who reaches ChornoSpan Reputation Rank 10 can purchase it for gold from the Span Rep Shop or you can get the AC shortcut version if you don't feel like grinding the rep. The AC version will be sold both in the Rep Shop as well as from RAGNAR. Please note that Itzachi has returned to Arcangrove and Ragnar (the big dude in blue armor in Battleon) has taken over Class Dealer duties.

You will notice that the class art is partially color customizable so you can set yourself apart. The chest and loincloth CCs to Base and the leggings CC to Trim but you can't change the red underclothes or the gold armor.

As the name suggests, it is a Thief based class who works really well with a bunch of DEX. The first thing to note is that this class has been built to focus either on Dodge or Crit or a mixture of both so I highly suggest Thief Enhancements and but you might like a challenge, or HP or more Crit. I like that the class has more than one viable build to it. It is built on the Rogue mana regen model so you will get both HP and MANA from every dodge which is a good argument to focus on a dodge build. PRO TIP: Even though this is a single target class, if you engage multiple enemies at once you get a LOT of Dodges and thus a lot of HP and MANA flowing in.

Let's look at the skills. Whovians... keep your eyes peeled for Dr. Who jokes.

Light Damage attack that applies Stolen Life which steals seconds from your foe's life.  This causes you to move faster and raises your Dodge chance with each stack. Stacks 5 times.

Each stack of this skill adds 3% Dodge to your base Dodge. It's VERY mana cheap and the cooldown is amazingly short. You should be CONSTANTLY using this skill and keeping your Dodge boosted all 15% to keep the heals and mana flowing.

Moderate damage attack that also applies Deadlock to your foe. When Deadlock reaches four stacks, all stacks will be removed as your body travels backward in time and life will flow back into you (HoT).

This is a very fast and fairly mana cheap moderate damage skill. Once you reach 4 stacks of Spilling Sands the Heal auto-casts itself on you but don't expect a huge heal. It's only intended to supplement the heals you have flowing in from dodging to help you survive. Think of it as a fast damage skill and the heal is just gravy.

Moderate damage attack that applies Time Ripple to the target up to 3 stacks. Each stack of Time Ripple increases your chance of getting a critical strike and increasing your critical damage but also increasing the damage you TAKE from any critical attack against you.

Another decent moderate attack with cheap mana cost. The cooldown is a little longer but that's as much to keep you alive as anything else. Remember that every stack of this skill does make you crit harder and more often but it also makes everything crit on you a lot harder... IF they can hit you.

It's hard to hit someone who can see the future, and EXTERRRMMMMINATE!

Wraps your target in a swirling torrent of time, confusing the target and causing it to hit itself when it tries to hit you. Lasts 6 seconds.

This has a long cooldown and is VERY mana expensive but there's a reason for that. It's a classic confuse skill. For 6 seconds the monster hits themselves instead of you. You might see a green heal 0 flying off the monster along with the damage but that's just part of the way that damage is calculated. It might seem a little OP until you realize that you've got Dodge stacked up to your ears and the target has to actually HIT you for the skill to do anything. It does make group PvP a lot of fun but it is pretty insane in 1V1 duels. Still, we have enough faith in the 1v1 PvP nuts to know when to back off someone when they use a skill like this.

It's more useful in a Crit build than a Dodge build but even in a Dodge build it's a great survival tactic. PRO TIP: Your Dodge skill might be applied to you, making you dodge multiple enemies but TEMPORAL INSANITY can only confuse ONE target at a time.

Rarely, when your hit points drop below 10% and your life is in danger, your health and mana will be restored to full and all damage taken will be significantly reduced for 10 seconds..

When you get pretty close to death, this skill will return you to life (maybe you have a new face and a penchant for bow ties... maybe not) with full HP and MANA and since the regeneration energies are still flowing through you, you are very hard to damage for a short while (like maybe you'll grow your hand back or something).

Considering how rarely you SHOULD die using this class effectively and considering that most Rank 10s are huge damage boosts, we have significantly raised the chances that you will see this passive proc. it is FIVE times more likely to go off than most other rank 10 passives.

Remember that this class goes live TOMORROW during our MID-WEEK RELEASE, but don;t forget to come back on Friday for the return of our annual Black Friday Shop with a bunch of new Blackened items

30 days until Just Another Day

Tags: Cysero, Thief Of Hours Class, Would You Like A Jelly Baby?,
Read more Design Notes