The Ruins Of Great Gilead

A Magic City Frozen In Time

This week in Arcangrove, Rayst sends you to the Ruins of Great Gilead for the third piece of the Supreme Arcane Staff. This was once a great city teeming with magic users, but they began to rely on their magic use so heavily that it eventually causes as horrid, magical catastophe.

Since that time the ruins have been a ghost town, too heavily steeped in raw magic to rebuild upon. You will find pieces of tower flowting in their places, fountains spewing fire intead of water, elemental spirits gurading the lost souls of Great Gilead... and a bunch of really amazing gear! 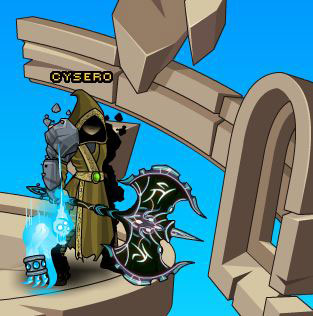 While you are there you will meet Umbra the Shaman who communes with the spirits of the devestated city (not ghosts, but the spirits of the city itself). Complete his tasks and you will find yourself facing a magical gate. It's a fairly simple locking mechanism... if you read the instructions. 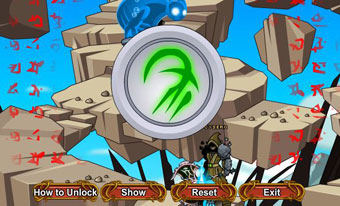 Through the runegate you will face a Mana Elemental... a pure expression of raw, untamed magic. Unlike Ledgermayne, this beast is a mindless form filled with rage and more goodies (if you hit him hard enough, he drops some really nice stuff that you can't get anywhere else!) 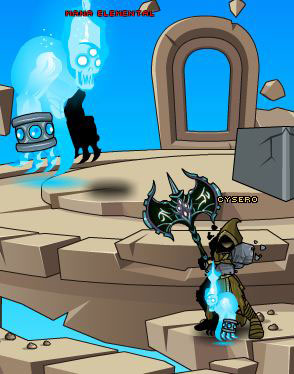 This week also brings you some new music from Warlic (featuring the vocal talents of Alina!). This zone has been FANTASTIC for music, and we hope that you're enjoying it as much as we are. It really sets the mood for the area that you are adventuring in.

Sort of. If you are a member, you know about the Upgrade Shop in Battleon. We were feeling like this needed a little attention so Skyline has made the SG3000. It's a pretty slick looking gun but the best part about it is that it has a FIRING ANIMATION built into it. Simply click this new, awesome firearm and watch it discharge round after round. 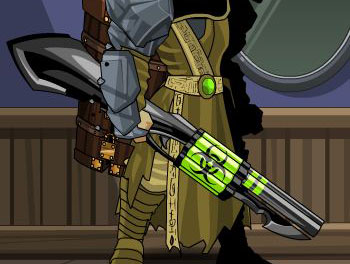 As of yet, you still can't actually SHOOT monsters with guns or bows but it's a step in the right direction!

If you look around we added a few more items to other shops aroudn the game but I like surprises so have fun finding them.

You will notice that Quibble has gone and taken his items with him. He will be back next Talk Like A Pirate Day (Actually, he'll be back much sooner than that) with all new stuff. This year's stuff was a big hit and all we can say is that we're glad that you like it!

On the question of Rarity: People often ask about the rarity ratings. I'm leaving the scale up to you guys to discover. Eventually you'll be able to look through the AQW wiki and tell just by looking at the number of items with a certain rarity how rare they are.

We will probably be adding "Quibble" as a rarity, meaning... it may return to game, or it may be a permenant rare item.

For those of you who found J6's little addition, that has was also removed earlier this week. it may be back next year.... it may not be.

AQW has been alive for nearly 2 years now, and thanks to you all (special thanks to the members and bigtime AC buyers who have kept the game running all this time) it looks like we'll be here for quite a while. My question to you is this... What is your favorite AQW memory? An event? A cutscene? getting that super duper rare drop minutes before it went rare? Hanging out with your friends? Maybe you have a memory from Alpha that you want to share. Let us know on the forums.