CRUSH Your Enemies with the Brightoak Grove Saga Class!

The Brightoak Saga is rockin' towards its finale tomorrow, and with this weekend's story release, we ALSO have the new zone Class: StoneCrusher! This magic-using, monster-smashing class is pretty wicked, and its strength is something you will NOT want to take for granite! 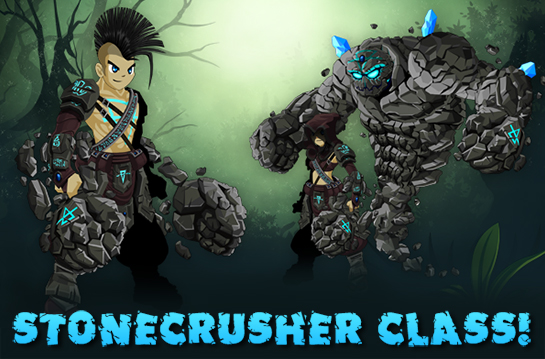 Infuse the natural magic of the Shaman class with the power of mother earth herself, apply the tried and tested support aspects of Bard, and you have the ultimate class passed down through BrightOak Grove-- StoneCrusher. You’ll often find yourself heavily supporting the party, but anyone that thinks this class can’t pack a punch will find themselves between a rock and a hard place. Wizard enhancements work best, as most damage this class deals is magical; Spellbreaker could be used for more survivability, Healer is a good middle ground for survivability and damage, and Luck is always an option if you’d like your auto attack to crit more.

How to get the StoneCrusher Class

Unlock our newest Tier 2 Class immediately for 2000 AdventureCoins in the Battleon class shop or reach find it in the Brightoak Rep Shop. To access the rep version of the Class, you'll need the following:

Mana model: Gain mana from all hits landed in combat, especially on crits. The amount depends on damage relative to their own HP total.

Super-Awesome Special Note: EVERY SKILL HAS A 25% CHANCE TO APPLY MAGNITUDE FOR 4 SECONDS 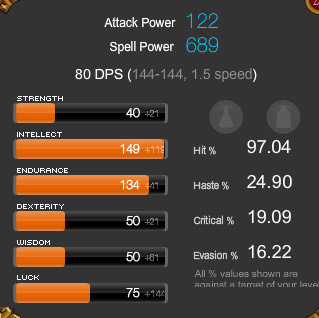 Read on for the StoneCrusher Class Skills!

StoneCrusher has a standard auto attack, but that doesn’t mean the class is lacking innovative functionality. Every time you use one of your four skills, you have a 25% chance to really channel the earth’s fury into your attack and activate the Magnitude effect. Magnitude occurs randomly and only affects the skill that triggered it, but the bonuses are pretty amazing. Each skill is affected differently by Magnitude, so be sure to pay extra attention to the skill descriptions here!

Causes a stalagmite to erupt out of the ground at your opponents feet, dealing damage and crippling their defenses. Applies Sundered to the target for 8 seconds, increasing all incoming damage by 8%

The first thing you should keep in mind is that this class is a mix of Shaman (a strong, damage dealing caster class) and Bard (a buff/debuff oriented class focused on supporting the party). The first skill capitalizes on both primary aspects of these classes; the stacking effect increases ALL incoming damage to your enemy, and the damage on impact is pretty strong as well. the fun doesn’t end there though: When Magnitude triggers, the damage dealt by this skill increases by about 3 times its normal amount and you gain a 50% chance to stun your opponent! With a relatively low cooldown and the crazy haste buffs StoneCrusher has, you’ll definitely find yourself spamming this skill (as you should be). 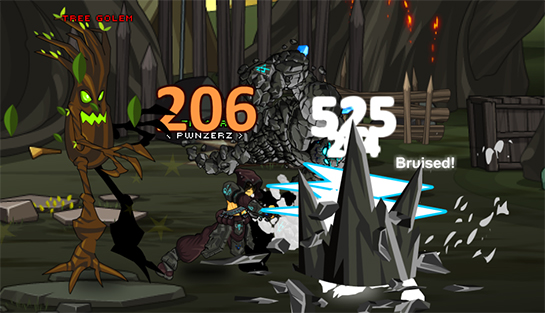 Draw upon the strength within the earth to conjure a barrier of stone. Applies Shielded, reducing all incoming damage for the caster and up to 5 friendly targets by 50% and applying a small HoT (55% spell DPS per tick) for 6 seconds.

Note: If Magnitude is applied, reduces all incoming damage by 99% for caster and  up to 5 friendly targets and applies a 55% HoT for 8 seconds

This is the first of two bard themed support skills on the class, and is currently the only skill in AQW that provides a group damage resistance modifier. The low cooldown on this skill, when paired with the rank 4 passives and buff from the third skill, allows you to loop this skill into itself so the buff is always applied to you and your party. The Magnitude effect is incredibly strong, reducing all incoming damage by 99%! Because this skill is so strong, the Magnitude effect applies only to the player; don’t worry though, your allies will still receive Shielded even if Magnitude triggers.

Harness the residual energy of great battles from ages past, trapped beneath the surface. Applies Resonance, which increases haste and crit chance by 30% for the caster and up to 5 friendly targets and returns twice as much mana with every successful auto attack. Lasts for 10 seconds.

Note: If Magnitude is applied, also reduces mana costs by 20% for caster and up to 5 friendly targets

Can you say “near infinite mana”? Because this is essentially what Echoing Earth accomplishes! This is currently the strongest mana buff in the game, as it increases all facets that mana regeneration relies on and returns TWICE as much mana from auto attacks. If you have a BattleMage, Darkblood StormKing, Collector, or any other class that could potentially consume a lot of mana fighting alongside you, this buff will help them a lot, and that’s not even taking into consideration the Magnitude effect (which applies to the whole group). This buff also significantly increases the amount of damage you end up dealing as increasing haste allows you to attack more and increasing crit chance means you’re dealing more damage. Yay, damage! 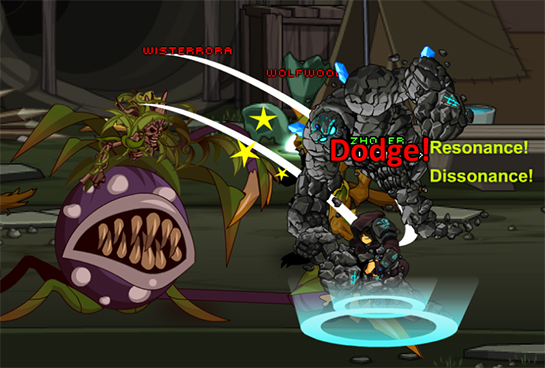 Rip open the ground beneath your opponents feet, dealing massive damage. Also applies Aftershock for 30 seconds, a DoT that grows stronger with every attack that hits your opponent.

As the icing on the cake, the class has a nuke skill to tie everything together. The damage is respectable on its own, but the real reason you’d want to use this skill (especially with a group) is Aftershock, the damage over time effect that grows stronger every time the monster is attacked. When Magnitude activates on this skill, it isn’t too different than an actual earthquake triggering. You deal massive damage, apply the Aftershock DoT, and also  create a sinkhole that reduces your target's haste and crit chance by 40%. This skill also has the longest cooldown, so when you’re lucky enough to activate Magnitude the payoff is larger than the other skills.

These passives really tie together two big elements StoneCrusher revolves around: strength and support. The additional survivability from Shifting Plates allows you to stay alive longer and continue supporting the party, while Gaia Knowledge’s Haste boost reduces cooldown times even further and lets you use all your skills as frequently as possible. In fact, when Echoing Earth is coupled with Gaia Knowledge, this class ultimately gains 50% extra Haste; that’s 50% more auto attacks and 50% less time spent waiting on cooldowns!