For the first time ever, we are making a version of the new HeroMart Calendar Class available in-game! Starting this Friday, unlock the full class and armor set when you buy a ShadowStalker Key for 6000 AdventureCoins from Chronix in Battleon. 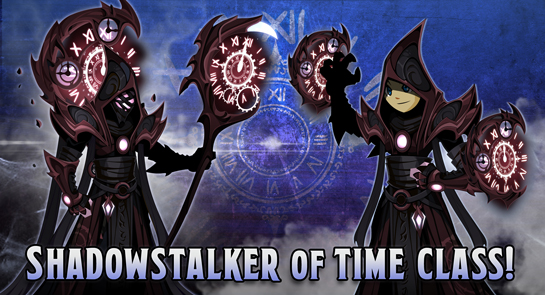 The ShadowStalker Key will unlock:

Note: the ShadowStalker Key cannot be sold... so make sure you really want the class before buying the key!

This is a variant of the exclusive 2017 Calendar Class!

You are right on point, disembodied voice! We are breaking with tradition this year and selling a variant of the 2017 Calendar Class in-game... for a few very good reasons.

We have players who would happily pay for the calendar but:

Because of changes in how mail systems and services work*, and where those companies will ship to, we are physically unable to send the calendar to people who would happily pay for it in order to get the class (and the gameplay/skills that come along with it).

The majority of our players cannot choose where they live... or where our mail company ships to. We don't want to punish those players by preventing them from getting the calendar.

* Some of this is due to current events around the world... which neither we or you guys can control. 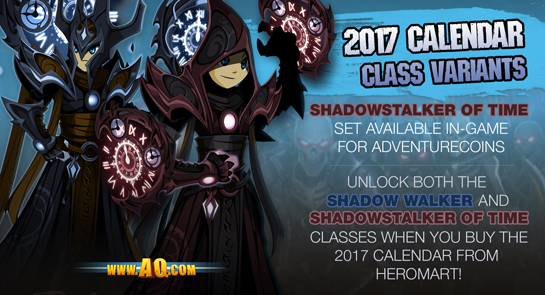 If you are buying the Class from HeroMart...

We don't want to punish you because other players cannot get the Calendar/Class from HeroMart. So, in the spirit of fairness...

"Why is the class so expensive?! 6000 ACs is a lot!" That's a fair question with an easy answer. Many people buy the calendar just to get the class. This is an opportunity to get the class, not a discount.

"If I buy the in-game class, do I get the calendar?" No, the in-game variant does not come with a calendar. This is geared primarily towards people who want to get the class but, for whatever reason, cannot purchase the calendar from Heromart.

"If I buy the in-game class, do I get the character page badge?" Nope. This is geared towards people who want to get the class (and its skills). We don't want them to miss out on the gameplay. The character page isn't a part of the deal.

"Why do people who buy the calendar from Heromart get more gear?" We have a lot of people who collect classes. We don't want those people buying the Heromart calendar to get the Shadow Walker of time class and then feel like they have to ALSO buy the ShadowStalker of Time in-game variant. Plus, this is the 2017 Calendar Class... if people are buying the Calendar for the reward gear, it's only fair that they get all of it!

"Will this be available for older calendar classes like Chronomancer?" No, those have all sold out. No in-game versions of the classes are available.

"Will the other games be offering their rewards in-game?" At this time, AQWorlds is the only game with an in-game reward option.

"Will you do this for future calendar classes or other Heromart gear?" At this time, AQWorlds is the only game with an in-game reward option, and we are focusing on this year's calendar and plan. We will finalize plans for the future as we get closer to it.

"Will both class sets have the same gear/skills?" Yes. We want all our players to have the same opportunity to experience the class skills as the designers intended. Bost classes cost roughly the same, and therefore will do the same damage/have the same skills.