Battle through the Valley of DOOOOOM!

Sepulchure's Rise, the story of how a simple knight became the dread DoomKnight Sepulchre, continues this weekend! Quest as the heroic knight Sir Valen to defeat the Champion of Darkness. 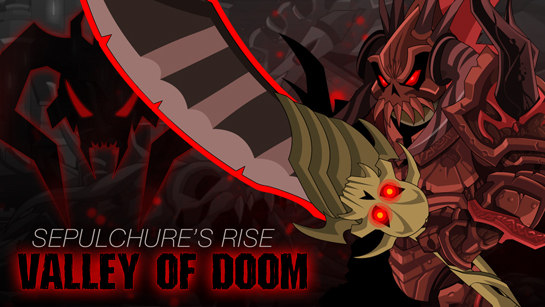 Quest as the heroic knight Sir Valen to defeat the Champion of Darkness. Wait a minute! That scroll from Part 1 said we already did. If you are asking yourself this then

1.) Give yourself 100pts for paying good attention. Good job!

2.) Put on your anti-spoiler hats and get ready for a plot roller coast.

Last week in part 1... which was not actually part 1. We were not ready with part 1 yet, so you sorta had a prologue, prequel, part 0 where you played as Lynaria or Alden. The adventure really starts this week.

Remember that scroll you unlocked after playing through the story? The one that says Alden and Valen defeated Dethrix-- the Champion of Darkness? He was defeated, but not dead. Well, he might be undead, but the important part here is that he is not UNDEAD-DEAD.  Which is really dead. Even for the dead. Extra dead.

As tonight's release goes live our trio of heroes will be on their way to restore the glory of Swordhaven... but that Swordhaven Oracle is really going to metaphorically poo in Valen's cereal.

#PROTIP The secret is making sure the Champion of Darkness never finds that BLOOD RED armor with the spikes on it. Ready to start the chain of events that breaks a heroic knight?

This weekend, gear up and show your allegiance to Swordhaven. Find Bright Dragon Knight set in the Featured Gear shop for AdventureCoins, and find the rest of the sets from the release merge shop, quests, and monsters. 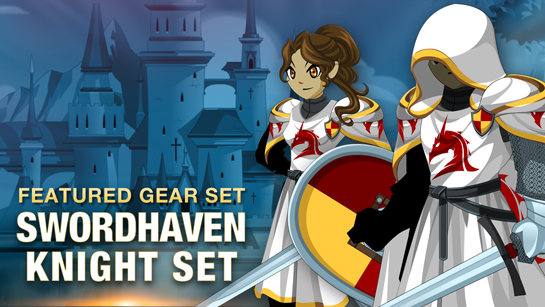 There are 5 factions of Knights in the AdventureQuest World's Kingdom of Swordhaven...

Find the Guardian Tower house for 2,000 AdventureCoins from Penny, the Centaur 21 house vendor in the /buyhouse map.