Y'arrrrr! Last weekend, ye fought to help choose the next ruler of the Midnight Sea... and the Vampirates flooded th' war meter with a bounty of helpful heroes. BUT the Lycan Buccaneers were NOT ready to parlay or recognize Bonnie's victory -- and THAT is why ye're needed to take down Captain Flintfang this weekend! 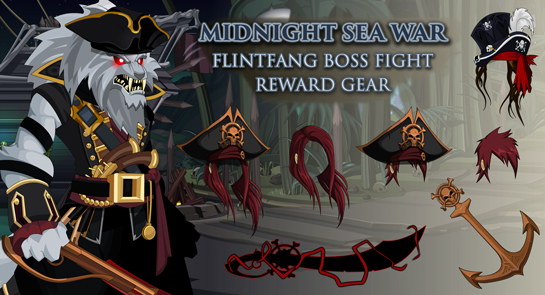 /join midnight war and talk to Bonnie's Lieutenant to begin the quest to take down Captain Flintfang! Each time you defeat him, you'll have a chance to get one of the reward drops shown above and listed below:

Captain Flintfang's armor and morph helm will also be available in the September Featured Gear shop until September 30th (for you heroes without much time to farm, but with a hunger for lycan-themed gear)!