Coming this Friday, you will fianlly enter the Magic Portal at the top of Arcangrove Tower and fight your way through the para-elemental plane of magic to face Chaos Lord Ledgermayne's Chaos beast... the Mana Golem!

This legendary creature, like Ledgermayne itself, is a being made of pure magic. The difference is that the Mana Golem was crafted by mages long ago  as a magic weapon of last resort but prooved too dangerous to control or even allow to exist, and too powerful to fully destroy.

The Mana Golem was moved to the para-elemental plane of magic where it could harm do no harm if it were ever to be awoken from it's unnatural slumber.

This week we are also re-releasing AQW's MOGLOWEEN EVENTS from the past two years! You'll head back to the spooky town of Mystcroft which only appears during this spooky time of year and meet up with your friends Bubble (Bubble), Toil and Trouble, The Cauldron Sisters! 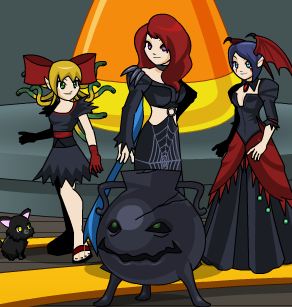 This will give you a chance to catch up on last year's insanity before we release THIS year's exclusive Mogloween content NEXT week (The Children of the Candy Corn!)! It will also give you a chance to get this year's 2010 tegged season rares, season rare house items and the ever popular Pumpkinlord Class (which cannot be tagged)!

Now that we've raised the level cap to 35 you're going to need some new Enhancements to get your gear up to spec! We're currently working on adding these new Enh to every shop and we should be ready to release them later today or tomorrow at the latest! Keep your eyes on the DN's for announcements!

As Beleen noted below, today is the day that Candians give thanks for all of their Canadian blessings. As we did last year, we have opened the Canadian Thanksgiving Shop and we will keep it open until Friday, when the AQW 2nd Birthday Event also (maple) leaves! 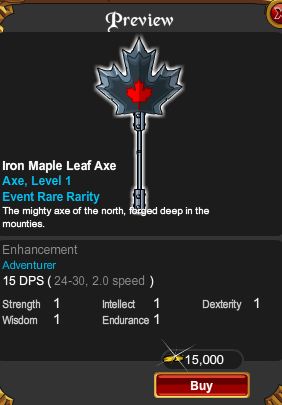 Beta for BladeHaven is scheduled to begin on Thursday. The Beta will use the ONE LOGIN TO RULE THEM ALL and will be open to Guardians, DragonLords, Star Captains, AQWorlds Members and... um... we have no idea what Epic Duel players that upgraded are called... but yup, them too. Bladehaven is a first person sword fighting game. It features achievements that will earn your master account EXP.

Time Is Running Out!