May the Fourth Be With You...

The First of 4 May Holiday Rares Shops has Arrived!

Here at the Secret Underground Lab, we are all game developers... but also HUGE nerds! All I've been hearing about in the lunch room is Star Wars, clones, and what would happen to pop culture if the Star Wars and Avengers franchises crossed-over (hint: EXPLOSIONS)! 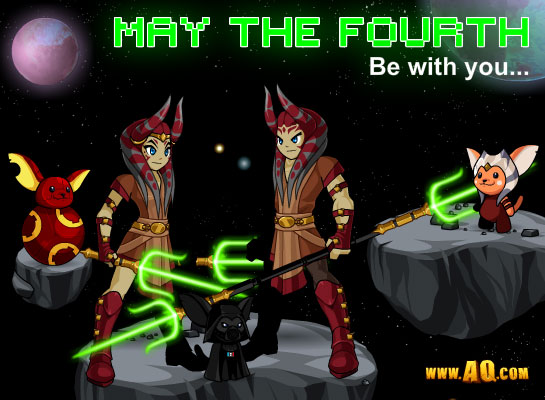 To celebrate this nerdiest of pop holidays, Memet launched herself into hyperdrive on Friday and created all-new gear based on one of her favorite new characters: Ahsoka Tano. YOU can head into AQWorlds now and find the May 4th (sci-fi/space-themed gear) in the May Holiday Shop in your game menu for a limited time.

Why IS May the Fourth a Holiday?

"May 4 is considered a holiday by Star Wars fans to celebrate the franchise's films series, books, and culture as well as strict religious rituals.[3] The date was chosen for the easy pun on the catchphrase "May the Force be with you"—"May the fourth be with you". Even though the holiday was not actually created or declared byLucasfilm many Star Wars fans across the world choose to celebrate the holiday."