The Magic Thief: Chaos in your Veins

Join us for a fantastical AQWorlds in-game special event with magical literary guest-star, Sarah Prineas. Meet magicians, thieves, nobility, and misery-monsters as her characters cause Chaos! The ley lines which contain Lore’s magic are vulnerable to infection by Chaos. 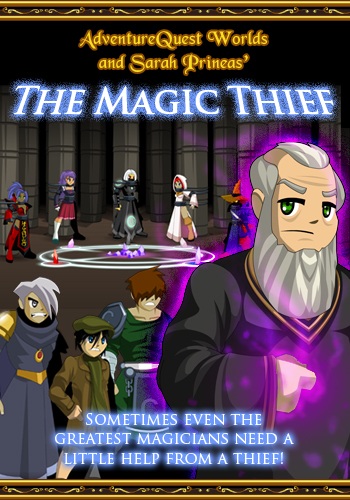 When Drakath uses the nefarious wizard, Pettivox, to infect them, it will be up to you and Conn – a pickpocket turned mage – to save all of the magic (and mages) on Lore! Log into AQWorlds on March 23rd 2012, at sundown for the most magically, massively, manipulative event yet!

On behalf of the entire AQWorlds team, we want to thank Sarah Prineas for being a part of this special event! She has generously spent her time and energy helping to make our first guest author event so monumentally magical!

If you’ve enjoyed meeting Conn and the rest of the cast of characters that live in Wellmet, we recommend you check out her Young Adult novels! Fun for readers of all ages, the fantastical world she’s created will put you in Conn’s place as you adventure in a land of magic, mystery, and massive mayhem!

You'll have TWO separate shops - an event rares shop and a permanent event rewards shop - quest rewards and monster drops! Be sure to check all of the shops for the gear you're searching for and if it's not there, get to battling!

May the fates favor your swords and spells when you confront Pettivox to save magic from Chaos! The future of Lore’s magic rests in your hands, Hero!