Get Ready to Start Lycan Our Next Class!

Lycans. Interesting folk. Rather than living aristocratically the way Vampires often do, Lycans live off in caves and hovels. Lycans need no luxury. They hunt, they fight, they survive. They earn their respect. Not through bloodlines or wisdom and experience or even pitting their clans against one another. 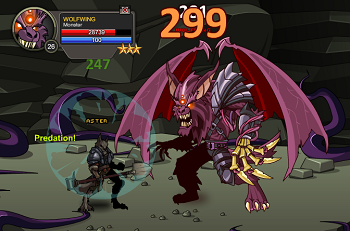 Their leaders are decided through single combat. Those brave enough to challenge authority and strong enough to wrest power from their leaders are the most deserving. This isn’t always favorable. You never know when some lunatic is going to take charge. If your philosophy is similar, or if you just think becoming a fearsome hunter of the night is really really cool, you, too, may become a Lycan.

How to unlock Lycan Class:

This furry powerhouse has STAYING power, and for those of you who like the challenge of taking down our toughest bosses, you know that a good heal-over-time can come in handy when you're just about to take a claw to the spine. Its unavoidable attacks make it survivable in the toughest arena, too.

For those of you who like farming, we've got you covered (in color-custom fur, no less)! Thrill of Battle and Savagery are multiple target, which means more slaughter, which means MORE REWARDS! When you spam them to grow your HoT and get your avoidabl 10% damage, pretty much all the beasts you face will FALL before your lycan might!

This isn't a support class, but that's because Lycans are formidable on their own, especially with its multi-target skills and healing. That heal will take a bit longer to build up when you are fighting solo, but it's definitely reliable in battle and will get the job done RIGHT when you're at full power.

The class also cuts critical hit chance; critical hits are a serious threat to your health and preventing your opponent from landing one means theres less of a chance they'll hurt you faster than you heal. That is a GOOD thing for any hero, at any time.

Some people with Lycanthropy contracted the disease by being bitten by a Lycan and surviving. There are other methods of becoming a Lycan, but in all cases this results in a powerful transformation. This is the standard Auto Attack, but it’s a little beefier because Lycan shares the same base stat spread as Berserker.

Rank Needed: 1
Mana Cost: 30
Mana Cooldown: 20 Seconds
Type: Physical
Description: With your new legs you send a mighty leaping kick to the head of your enemy, causing them, at the very least, to become really dizzy.

When this attack lands, your opponent becomes Disoriented for 12 seconds. This cuts their Critical Strike chance by 25% for that time. Otherwise, this does 200% the damage your AA does. 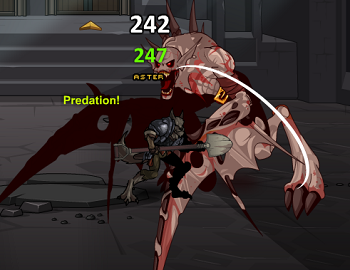 Rank Needed: 2
Mana Cost: 20
Mana Cooldown: 6 Seconds
Type: Physical
Description: Diving into the fray suits you, and it gets your Lycanthropic blood pumping, kicking your regenerative abilities into action.

One incredible power that Lycans have is how they regenerate, and you will certainly be no exception. This attack can hit up to two targets at considerable range. For every successful hit, you gain a stack of Predation. Predation is a Heal-over-time that can have 6 stacks maximum and lasts 8 seconds if not refreshed.. It’s based on your Attack Power, and is not affected by the damage range of your weapon.

Rank Needed: 3
Mana Cost: 15
Mana Cooldown: 4 Seconds
Type: Physical
Description: With the strength and agility of a Lycan, a clumsy flail in an attempt to hit something becomes a nearly inescapable barrage.

This skill also hits up to two targets. What’s special here is that your flurry of blows is so rampant and random. You cannot land any crits with this, but it’s a cheap skill that strikes two targets at range and never misses! 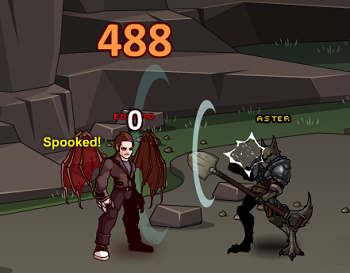 Rank Needed: 5
Mana Cost: 10
Mana Cooldown: 10 Seconds
Type: Physical
Description: You let loose a blood-curdling call to the sky and your opponent, shaking them to their core. Hopefully.

The howl of a Lycan strikes fear into the heart of it’s prey.. Most of the time.. You can finally be the one to wield that fear. I mean, unless you aren’t scary. This skill does not deal damage but it also cannot miss and has quite the range. It has a random chance for one of four different lengths of stuns! You.. May also not stun your enemy at all. Can you imagine your voice cracking when you’re trying to be intimidating? Jump-scares don’t work every time.

Dogs have noses. Wolves have noses. You have a nose and it’s kind of good at what a nose does. You know how to make it better? Become a Lycan. These passives assist your mana regeneration. You regain mana the way a Warrior does: by landing hits and being hit. You want to strike, and when you are struck, you want to make sure it doesn’t outspeed your healing. 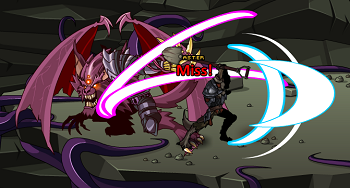 Note: The class is still being balanced. Mana Costs, Cooldowns, Skill Descriptions and even the effects of some skills could change before release. Keep an eye on Blade's Twitter for pictures of the coming Class art!