LIVE At Yulgar's Inn: The NPCs

The NPCs, Yulgar's House Band, have Arrived at the Inn!

Log in NOW and /join yulgar, because the Inn has been remodeled! We've added a band stage and the first-ever AQWorlds house band, the NPCs. They've got a permanent spot right in the heart of the Inn and will stay there until Serenity finds guest bands to begin making appearances. 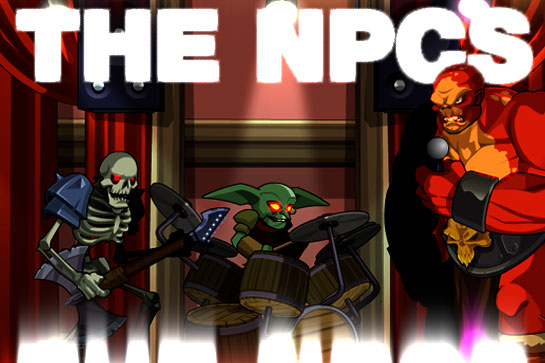 Last month, Artix talked about expanding the Inn - adding in a live house band, quests, and fun new events. The band has arrived and, while they are getting everything set up, Serenity - their promoter - has some rockin' quests for you to battle through.

I know some of you have heard the drama surrounding the band that will appear in Yulgar's Inn next week... I spoke with Artix today, and he's giving Synderes' lead guitarist a call tonight. I'll have a full Design Notes post just about that for you tomorrow.