The power of the Legion DoomKnight is now available for you to wield. But before you do that here are a few things you may want to know about the class. 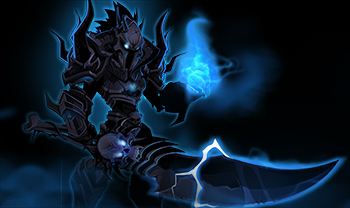 There are THREE ways you can get the seasonal* Legion DoomKnight Class:

* Only available during Dage's birthday!

Thematically Doomknights are strong powerful relentless and hard to kill. So rather than make a class that could do large bursts of damage I designed a class that is a relentless and continuous killer. This class is designed to keep fighting non stop and to survive whatever challenges it. The skill descriptions here are more detailed with more numbers than in the game.

Mana regen: Legion DoomKnights gain mana from all hits landed in combat,and especially on crits. The amount depends on damage relative to *their own* HP total.

For Stats and Enhancements: Legion DoomKnights use both strength and intellect to fight their battles. Hybrid or Luck enhancements are a good start as they give a good balance of all stat type, but basically all stats help the class in some way so you mix and match to find out what works best each move and the class as a whole.

Primarily this class is meant to be good at soloing bosses and going it alone against monsters. It does have some support qualities built into it which will increase the damage adventurers around you do to your target.

You leave a mark of Doom upon your opponents soul which slowly but surely cripples them. Applies Touch of Doom and Touch of Death to your opponent which stacks up to 5 times.

This move is designed to be the core of the class giving your immense power and endurance while still dealing physical damage. Thematically doomknights have immense strength and defence and can last long battles. The longer the battle the better off you are (until you reach the max stack of 5). This move also pays homage to the first move of the original Doom Knight, which also uses a stack effect.

This move may seem too powerful against standard enemies but you won’t reach a full stack till near the end of your battle if you are on your own, or likely not at all in a group. Not to mention, half of your bonus damage and all of your bonus resistance is lost when you chance target. This move will only be of full usefulness in long boss battles but will still provide a welcome power in normal battles. This move also increases the damage that any other players do to your target by up to 25%. This means that high damage classes, such as Legion Paladin, will benefit immensely from this.

You assualt your opponent's soul directly, taking some of their power to strengthen yourself and their life force to heal yourself.

This is what gives you your endurance. A dependable heal that deals magic damage to your opponent and keeps you fighting for a long time. It may not seem too great, but once you have your incoming damage reduced from using Touch of Doom you’ll find this heal is more than enough for your needs.

Immerse yourself in the Darkness of the Legion and of Doom. You use the shadows to strike at your opponent unexpectedly doing moderate magic damage. Applies Torment for 4 seconds. Also reduces your opponent's haste and hit chance by 15% for 4 seconds.

This move deals magic damage and gives you a bit of breather when fighting because of the haste and hit debuff it applies to your opponent. The few seconds of respite it gives in combat can make or break a solo boss battle.

All attacks do 20% more damage.

Your relentless damage becomes even more powerful, and you gain a greater chance to land critical hits on your opponent while missing less often.

Doom hastens and the Legion beckons. Does a strike for large damage and hastens your opponents doom dealing a 1260% DoT for 8 Seconds. Also adds Decay for 8 seconds preventing your opponent from healing. (use the Decay effect from Paladin Slayer’s “Dark Energy” move) and a 15% bonus to your hit chance for 8 seconds.

This functions as your nuke but not in the traditional sense. It is based off of your physical damage. Rather than having a single strike of massive damage it has one smaller hit, but a killer DoT which brings in relentless and continuous damage. Most of your damage from this more should come from the DoT unless you are lucky enough to critical hit with it.

It’s a great class with lots of power and great survivabilty and it fulfils its purpose of soloing incredibly well. This class can even solo all 13 Lords of Chaos if used correctly. It is not a class you want to miss out on.