As a way of saying "thanks!" to the 2.5 MILLION AQWorlds heroes who did not get muted or banned in 2014, and as an incentive to keep following the rules in 2015, we are awarding players who helped keep AQWorlds a positive, fun, and family-friendly game! 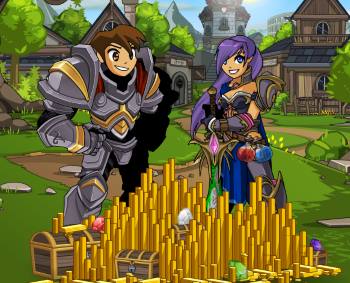 Starting tomorrow, if you meet the following requirements*, you'll receive 500 FREE AdventureCoins the next time you log into AQWorlds!

1/15 update: Please note, the Badge and ACs will not appear until you log in!

Last year, I talked about our plans for the server rewrite, and all of the new functionality it would let us do. We had to delay development on the rewrite while Yorumi worked on a number of backend and more immediate projects AQWorlds needed but the team is now at the point where we're ready to go back to it!

This week, Yorumi, Zhoom, Rolith, and I will meet to finalize the plan for Phase 1 of the server rewrite. The entire project will take at least a full year, but we expect to have Phase 1 ready for live-testing (after staff testing) by September. It's a pretty big project, but having the existing server to port TO will speed the process up. We are still looking at serveral months mi

Once we have AQWorlds running on the new servers, then we can start working on the many changes and new functionality ideas you all have told us about! That does include new anti-botting measures, as well as class improvements and bringing back old functionality.

After that meeting, I will post a longer Design Notes explaining in more detail WHY we need the server rewrite, what it will entail, and what changes we can expect to see (including chat filter improvements, less lag, character set save functionality, and more!)

* If you weren't eligible for the Honorable Hero award this year, never fear! We'll be awarding it in future years, too, so you have a chance to do better and follow the rules in 2015!