Everyone is DYING to defeat Grimskull's dungeon... 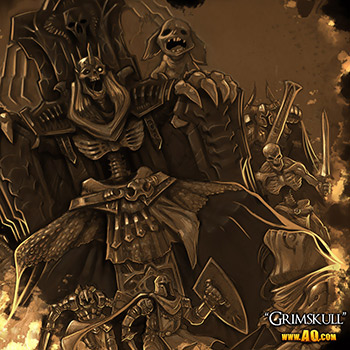 This Friday you will venture into Grimskull's first dungeon, "THE ENDLESS PIT OF DOOM!" If you survive the traps (insert the sound of Grimskull cackling here) and reach the end... you will have to face Raxgore the Unkillable. Much as his name would suggest, Raxgore is immune to weapons, spells, elemental damage, posion and... well, he cannot be killed by any foe. He was a cruel and merciless champion of the arena before he went missing some 10 years ago. Songs of his bloodthirtsty hunger for combat are still sung by bards. Note: Raxgore was well known for slaying bards who sung about him... and all the people listening to the song... and all the people who knew the people who had heard the song. Raxgore was pretty unreasonable. 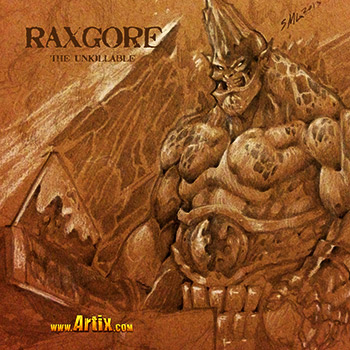 The dungeon is secretly in two parts. The first part is a compelte adventure and designed for players level 20+. However, if you are clever, you will discover there is a second, level 40+ area which is far more deadly. (... And if you possess the Grimblight Axe of Destiny, can face an ULTRA BOSS with an exclusive weapon drop!) 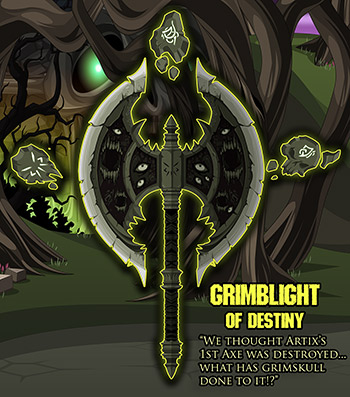 Each room of this new dungeon requires a large amount of custom code on every frame. The first part of the dungeon is 42 rooms long. As you read this out programmers have started on room #11.  We will be working through the weekend and next week to have a smooth, polished release ready for you. With enough testing, the only frustrating part of next weeks release... will be Grimskull's evil, evil, evil, evil traps!

Ghost's cutscenes are absolutely hallarious. That is, if you enjoy watching yourself meet a horrible and grizzly demise.... and then being laughed at. *dramatic pause* We feel that people are really going to love hating Grimskull. J6 created the backgrounds and art for the traps. The dungeon reminds me of the things I loved about DoomWood. It is always exciting to see what is going to be in the next room. A lot of work went into this release from all of the AQWorlds team. 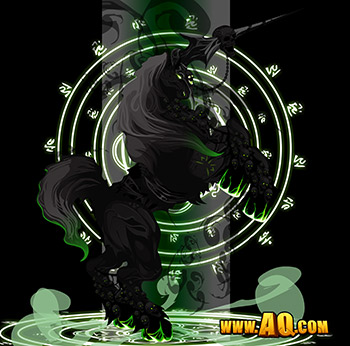 In Grimskull's dungeons, cutscenes are all about you going *SPLAT*. The second, hidden, part of the dungeon may never even be found by casual players (You would actually have to read to figure out how to access it... "OMG!") and contains high level monsters and excrutiatingly painful versions of the traps. The reward, will be well worth it. However, be warned-- part 2 will probably not be available this week... because the first half of the dungeon is 42 rooms long, each one requiring custom code by the programmers. The most complicated dungeon ever programmed in the history of the game. This is... a new "1st!"

Those of you who have been following the news on this release already know that it was a lot more work than our small team expected.  From the traps to the SCORRORBOARD (Grimskull's highscore board which counts the deaths of EVERYONE who goes splat in the dungeon), Dumoose and Yorumi deserve massive kudos and applause for their sleepless nights of coding. 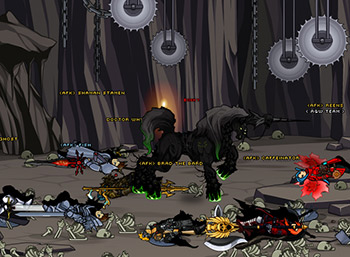 Even though we pushed the release back a week, it was still barely enough time. Actually, as I am writing this, Dumoose is still coding the final rooms. The puzzle rooms are built around the same concept as AdventureQuest3D's interactive objects. Except, the infrastructure does not exist in AQWorlds... so the only way to do this was to build each lever, button, door, secret door, trap and program it individually. One of my favorite parts of the dungeon are the monsters that change your character's size when you slay them.

What To Do After Dying In The Dungeon