This weekend is Mother's day! (Do something special to show how much your love her!) Next weekend... it will be FRIDAY THE 13TH!!! This is the ONLY Friday the 13th of the year, so we... are going all out! Prepare for a completely insane special event and... oh yes.... as predicted on this card from the AQWorlds Card Game... 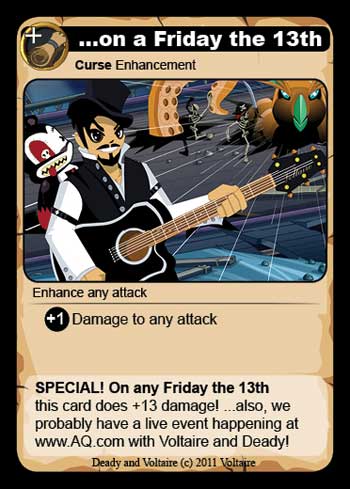 ...the return of VOLTAIRE and his super-cuddly and evil teddy bear friend, DEADY! But this brand-new Friday the 13th event will feature more than just all-new music, areas, monsters and items... you will get a glimpse of Deady's true form. Dunn dunn dunnnn!

The History of Friday the 13th

Amongst the superstitious, Friday the 13th is a super-unlucky day... ranking up there with breaking mirrors, walking under a ladder, or having a black cat walk across your path. Did you know there is even a fear of Friday the 13th, scientifically called Paraskevidekatriaphobia? Many players have asked me what is the legend and lore behind this day. (And more specifically... how come we do our largest, most complicated releases on what is supposed to be the unluckiest day of the year?)

In real-life history, on Friday the 13th, October 1307, the Knights Templar were completely wiped out by order of King Philip IV. (Sort of like how the Jedi were wiped out in Episode III by the Emperor's order 66.) Other notable reasons involve the combined unluckiness of both the number 13 (Note: Drakath has 13 Lords of Chaos) and day Friday itself (There is probably a good Rebecca Black joke to make here.) In the past 30 years, Friday the 13th was most-popularized by the scary movie series of the same name. This series was also responsible for making hockey masks an icon of spookiness!

In DragonFable, we were running our second undead invasion and it happened to take place on Friday the 13th. Players were surprised and laughing when they found that all 1 million undead were wearing hockey masks. It was our first major in-game parody of a movie. Players were used to fighting a large wave of undead monsters, so it was pretty funny when they eventually got the joke wave consisting of one... lone.... skeleton. His name was Chuckles. (Funny how everything is inter-related!)

Ever since, doing funny events on Friday the 13th became a tradition that our entire community looks forward to. It can happen one to three times a year. Each time we try to top the previous event. Two years ago we did our first live event with Voltaire on Friday the 13th. An article about it even appeared in a gaming magazine about how we crashed the servers. This coming Friday the 13th promises to be the best yet... and not just in AdventureQuest Worlds. DragonFable is doing something that is going to change.... everything! Get ready, friends!