Hiya guys, Artix here. My long time friends at Hyper Awesome Entertainment created a tag team brawler video game called Dungeon Punks. Maybe you saw us streaming last week while we were all sitting on the couch trying out the game. We instantly fell in love with its old-school arcade gameplay -- which reminded us of our favorite games, like Teenage Mutant Ninja Turtles, Dungeons & Dragons, and my personal mega-favorite, Golden Axe. It is fun… and when I saw the laser shooting unicorn mounts I LOL’d. Check out the game for yourself. 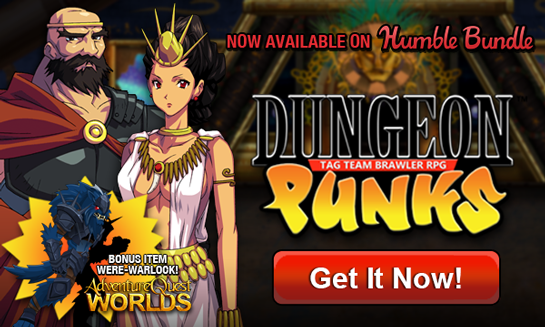 Starting right now, when you buy Dungeon Punks on our page using Humble Bundle, you also get the exclusive Were-Warlock armor in AdventureQuest Worlds. This armor was inspired by the Were-Witch, one of the playable heroes in Dungeon Punks. 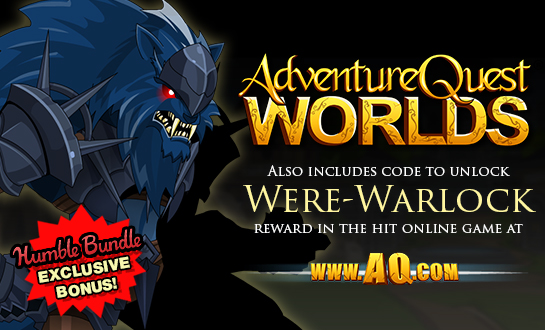 What does it mean to “Publish a game?”

Good question! You know when you load a console game and it has a few different game company logos on the front? They represent all of the people/studios who do different parts for the game. As long as you have known us, we have always done both the developing and publishing of our games. But we did not make this one. I know, at first glance from the art it looks like we did. Which is exactly why we were their first pick to be the publisher… which really means promoter when you get right down to it. Hyper Awesome Entertainment is made up of the guys who worked on Shadowtale back in the day. We have actually done a lot of things together and built up a lot of trust over the past 10+ years. Which is why I am proud to help spread word about their game and find it happy players.

Also, if this game does well there is a chance we could work together with Hyper Awesome on a game project in the AQWorlds or Dragon Fable universe. O_O Check out Dungeon Punks and see its game trailer at http://DungeonPunks.Artix.com . The game is normally $15, but we are running a 10% launch discount until the end of the month.