Battle to Save the World as a DragonSlayer General!

We first announced that we wanted to design the DragonSlayer General class back in 2014, and since then, it's become one of the most requested classes EVER! 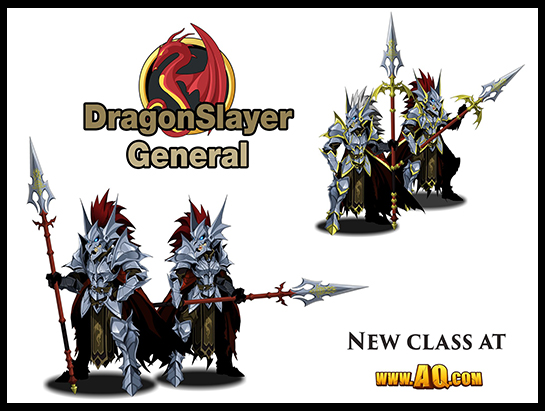 There are TWO ways to unlock the DragonSlayer General Class!

The rep version of the class requires rank 10 DragonSlayer Class, 30,000 gold, plus a number of merge resources. You're goiing to earn this one, 'slayers!

A strong attack known only to disciplined fighters

Deals 180% weapon damage. If target is Dragonkin, the specialized strike causes their skin to sear, dealing additional damage after 1 second as well as grants a 30% chance to sap 20 mana from any Dragonkin

This skill sole intention is mainly to deal damage. If the other skills are on cooldown or you have spare mana. It has a low cooldown and moderate mana cost, so you should be able to use it relatively often. When used on a Dragonkin, it has the chance of granting the user 30% chance of getting 20 mana back, to which is more than the amount of mana used on the skill to begin with. This skill will also do additional damage after 1 second on any Dragonkin. Each skill, besides Ancient Rites, grants extra damage to dragons after one second so wait a moment in between skill casts instead of spamming to take advantage of the extra damage.

Deals 50% weapon damage and taunts the target, causing them to attack the user for 10 seconds. If target is Dragonkin, you are inspired and your haste and damage output are increased by 40% for 9 seconds while the tongues cause enemy dragonkin's flesh to sear, dealing additional damage after 1 second.

This skill may not do much when fighting non dragonkin monsters as it only forces the target to attack you, but once used on one, it’ll do a whole lot. When used on Dragonkin monsters, it’ll increase your haste and damage output by 40% along with increasing your overall mana regeneration with being struck by an enemy in combat and hitting the enemy more. If you’re fighting a tough boss, save this skill for when you need to double up on Ancient Rites since it’ll cut its cooldown almost in half. This skill will also do additional damage after 1 second on any Dragonkin.

Deals 130% weapon damage. Applies one stack of Keen Eye, increasing hit and crit chance by 5% for 15 seconds and stacking up to 5 times. If target is Dragonkin, the gaze causes their hide to sear, dealing additional damage after 1 second.

This skill increases your overall hit and crit chance by 5% every time it’s used. It works on non Dragonkin monster so can be used on normal enemies, but gets better against fighting dragons. Don’t forget to wait the full second between casts to take advantage of the extra damage after 1 second.

The best defense is a good offense so dealing lots of damage is really important to get a substantial heal. If things are getting a little too risky, you can use Piercing Wyvern’s Eye before using Ancient Rites to gain damage reduction against all incoming attacks. This will lower the amount of damage added on to your auto attacks, but your survivability will surely increase.