Warriors, come out to play!

Drakel Warlords are kings of the arena. Using their brute strength and earned combat prowess they can dish out intimidating damage while fending off bevies of physical attacks. That's wny Pax the Warlord's Class Variant is based on the Warrior Class! 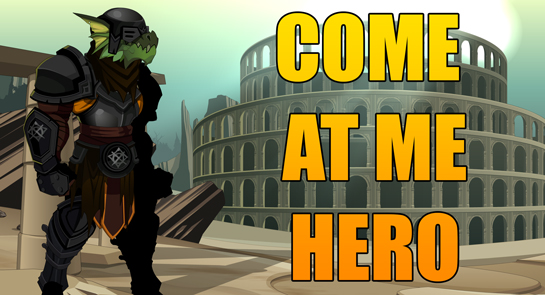 How to get the class

The Drakel Warlord Class is available from the Class shop in Battleon for either 2000 AdventureCoins OR 100,000 gold if you have a membership in AQWorlds!*

* The next Throne of Darkness Class variant will be for ALL players, and will requre rank 10 of the 4D Pyramid faction rep!

Notes: We wanted to keep the Warlord’s abilities heavy and hard hitting. The bonus damage on this auto means it’s crits are even bigger.

Tap into your Warlord strength to deal 200% attack damage and intimidate your foe, reducing any physical damage they deal by 7% for 10 seconds, stacking up to 5.

Notes: Your bread and butter spam skill. You get this at early ranks to help both your offense and defense. This skill is a mana trap if you’re not careful. The 10 second duration on the debuff means you don’t need to spam it constantly to keep Intimidation up.

You rage at everyone around you. Stuns up to 3 targets for 3 seconds. Your boiling blood heals your wounds, applying a HoT for 15 seconds.

Notes: AoE stun and sustain. As long as this doesn’t miss, it’ll keep you alive in just about any situation (barring DoTs maybe). You probably won’t be taking damage while you’re stunned so it’s a guaranteed bit of healing until the stun wears off. Combo this with Strike of Expertise and you shouldn’t have any trouble finishing your foe off.

Warlord’s experience on the battlefield allow them to position themselves to perfectly land attacks. Applies Prepared Strike, making any autos done in the next 5 seconds always hit and crit.

Notes: Critting on a 150% auto twice is pretty huge, especially with your crit damage buff on your passive. Use this in combination with your stun to guarantee the damage.

Notes: Helps targeting in pvp! Really though, this skill is the reason you dominate in 1v1 combat. Your 30% physical damage reduction passive plus Enter the Arena means you have capped out your physical damage resistance to the maximum (80%) for 15 seconds! This can be up 15 out of every 25 seconds which is 60% of the time (isn’t math cool)!