For years, you've battled Drakath, the Champion of Chaos. But how well do you know his story - what turned him from a young Prince into an all-powerful mage bent on achieving a single, world-shattering goal? This Friday, play as Alden, a young warrior destined to be the King of Swordhaven, and a young Princes Victoria as you quest to uncover the secrets of Drakath's past! 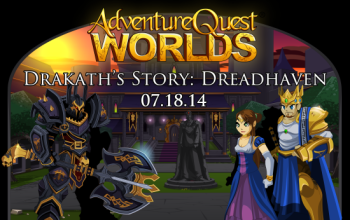 It's NEVER easy to predict just where Chaos will strike... or how it will wreak havoc on schedules! The release calendar has been updated to reflect the rest of the summer:

The first batch of rare Wheel gear will also return, and with a higher drop rate! (As promised when we cycled them out a few months back.) We're getting a lot of questions about what gear will go rare from the Wheel. Keep an eye out for Design Notes later this week with more answers!

Earlier today, Yorumi released a patch to PvP that should help the team balance in the Battleon war, but it hasn't done enough from what you guys say. With that in mind, he'll continue looking at the issue (which involves Flash ignoring basic code structure), but in the mean-time we are going to release a PvE version of the war.

That way, if you are having difficulty joining the PvP rooms or just prefer fighting monsters instead, you'll be able to contribute to the war effort!