Join us this weekend for the Feast of the Dead!

The townspeople of Darkovia live in perpetual twilight surrounded by lycans, vampires, ghouls, and ghosts. They live with death and the undead on a daily basis... so it only makes sense that they would want to celebrate the memories of those they've known and loved. And when there's a celebration to be had, there's only ONE person to call to make the feast: Oishii! 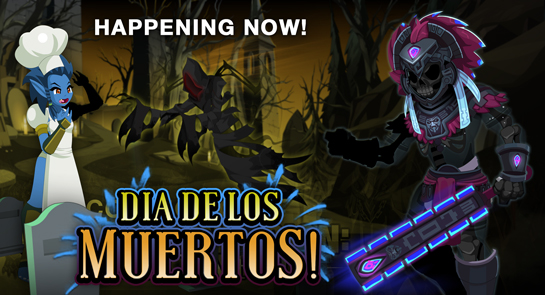 But it wouldn't be an AQWorlds release if there weren't SOME need for you, our favorite heroes, to charge into battle! There's trouble afoot, and YOU are needed to help save the feast and lay the troubled spirits of Darkovia to rest!

What IS Dia de Los Muertos, you ask?

GOOD question! The internet tells me:

El Dia de los Muertos (the Day of the Dead), a Mexican celebration, is a day to celebrate, remember and prepare special foods in honor of those who have departed. On this day in Mexico, the streets near the cemeteries are filled with decorations of papel picado , flowers, candy calaveras (skeletons and skulls), and parades.

It is believed that the spirit of the dead visit their families on October 31 and leave on November 2.

In order to celebrate, the families make altars and place ofrendas (offerings) of food such as pan de muertos baked in shapes of skulls and figures, candles, incense, yellow marigolds known as cempazuchitl (also spelled zempasuchil) and most importantly a photo of the departed soul is placed on the altar.

It might sound somewhat morbid, but the Mexicans react to death with mourning along with happiness and joy. They look at death with the same fear as any other culture, but there is a difference. They reflect their fear by mocking and living alongside death.

Living alongside death means that Mexicans have to learned to accept it within their lives. Death is apparent in everyday life. It is in art and even in children's toys. It is not respected as it is in other cultures. Children play "funeral" with toys that are made to represent coffins and undertakers.

Death is laughed at in its face. Many euphemisms are used for death, La calaca (the skeleton), la pelona ("baldy"), la flaca ("skinny"), and la huesada ("bony"). There are refranes, sayings, and poems that are popular with day of the dead. These sayings are cliches and lose meaning when translated. For example "La muerte es flaca y no puede conmigo" means "Death is skinny/weak and she can't carry me." Calaveras (skulls) are decorated with bright colors with the name of the departed inscribed on the head. Children carrying yellow marigolds enjoy the processions to the cemetery. At the cemetery, music is played and dances are made to honor the spirits.

Death is a celebration in Mexico. Death is among them.

(Thanks to niu.edu's informative page!)

Fight your fears this weekend as you battle your way through a haunted mansion designed to scare even the fiercest DragonSlayer. You have one goal: survive the terrors that lurk inside... J6’s House of Horrors! 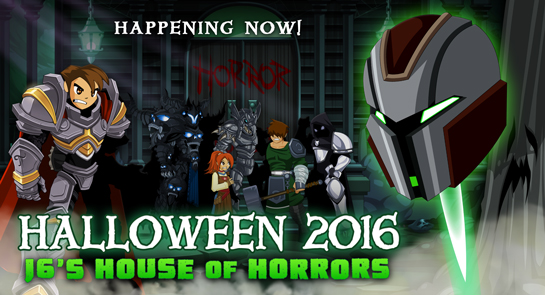 This event will only be available until next Friday, November 11th!

Celebrate the World Series Win with the Victory Cub!

The Chicago Cubs (my hometown team) won the World Series earlier this week after 108 YEARS! /cheer! For all you baseball fans, you can battle the Red Dragon in /lair for a chance to get the Victory Cub pet or the Victory Cap helms! 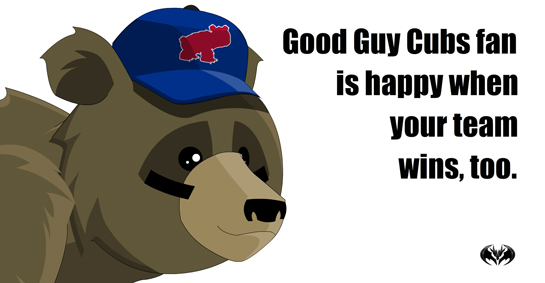